Items related to Commentary on the 2003 UNESCO Convention on the Safeguarding...

Blake, Janet Commentary on the 2003 UNESCO Convention on the Safeguarding of the Intangible Cultural Heritage 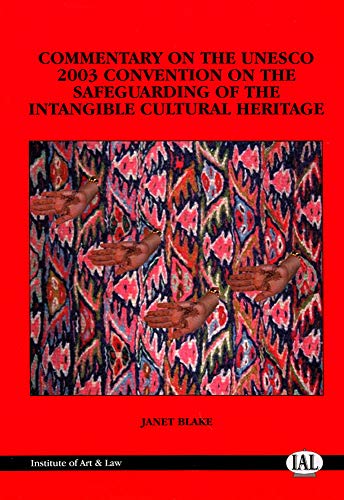 This book provides both a general introduction to UNESCO's 2003 Convention on the Safeguarding of the Intangible Cultural Heritage and its historical development, as well as a detailed article-by-article analysis of the Convention's provisions. The general introduction to the Convention sets out the historical background of normative and operational activities within UNESCO relating to safeguarding intangible cultural heritage, the relevant activities of other intergovernmental bodies especially the IP-related work of the World Intellectual Property Organization, the wider legal context within which the Convention has been developed and other general questions such as the treatment of indigenous heritage and traditional knowledge. The drafting history of the Convention is also presented, along with a brief overview of the instrument that includes discussion of its approach to safeguarding and the mechanisms it employs. This section also looks at the key notion of 'safeguarding' as opposed to the more traditional usage 'protection' and considers the significance of this choice of terminology. The article-by-article analysis covers also the drafting history of each article as well as a close comparison with the equivalent articles of UNESCO's 1972 Convention on the Protection of the World's Cultural and National Heritage that served as a model for the 2003 Convention noting, in particular, the significant departures of this more recent text to take account of the special needs of intangible cultural heritage. The centrality of the key notion of safeguarding and, where appropriate, questions relating to implementation and anticipated future developments in the law and practice related to this Convention are also considered.

1. Commentary on the 2003 UNESCO Convention on the Safeguarding of the Intangible Cultural Heritage