Items related to The Greatest Squadron of them All: The Definitive History...

The Greatest Squadron of them All: The Definitive History of 603 (City of Edinburgh) Squadron: Volume 2: 1942 to Date 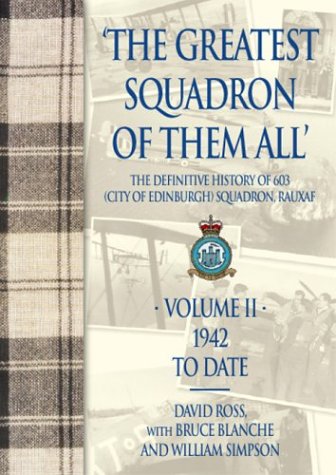 Formed as a light bomber unit of the Auxiliary Air Force in October 1925, it was at the height of the Battle of Britain that the CO of RAF Hornchurch, Group Captain 'Boy' Bouchier described 603 as 'perhaps the greatest squadron of them all'. And indeed, the Squadron has enjoyed prestigious and distinguished service second to none.

This extensive history details the 603 story through the early years with its colorful characters, through the Phoney War and into the Battle of Britain. Here pen portraits and narrative tell of acts of incredible bravery, heroism and loyalty to the cause by pilots and ground crew alike.

Following the Battle, the reader is led through 1941 and on to 603's part in the siege of Malta, through the anti-shipping strikes by the Beaufighters of the unit, to its return to England for re-equipping with Spitfires for operations in support of bombers and against V2 launch sites. Postwar 603 was returned to Auxiliary status, re-equipped again with Spitfires and then Vampire jets prior to disbandment in 1957. Re-formed in 1999, the story ends with the Squadron's duties in the modern day air force.

The team of authors comprises the most knowledgeable historians on the subject who between them have compiled the most comprehensive collection of documents and photographs, the selection of which, throughout the two volumes, is marvelous and unique.

The appendices are absolutely comprehensive and the narrative is full of fascinating anecdotes and memories. The Squadron heritage is deeply felt still by personnel at HQ in Edinburgh, and is supported by the 603 Association, consisting of the surviving ground crew members. Through them and this two-volume history, the memory of the Few and their countless other achievements will live on.

David Ross was born in Argyll and educated at Dingwall Academy and St Andrews University. He has written and compiled a number of books on Scottish history and culture. He currently lives in Hereford.

1. The Greatest Squadron of Them All. The Definitive History of 603 (City of Edinburgh) Squadron, Rauxaf. Volume II: 1941 to date