Items related to The Picture of Dorian Gray (Collector's Library) 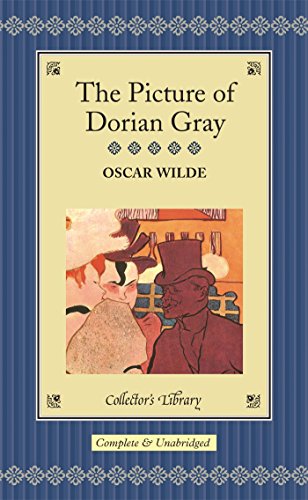 When first published, The Picture of Dorian Gray was regarded as dangerously modern in its portrayal of fashionable fin de siecle decadence. In Wilde's updated version of the Faust story, the tempter is Lord Henry Wotton, who lives selfishly for amoral pleasure; Dorian's good angel or conscience is the portrait painter Basil Hallward. The book highlights the tension between the polished surface of high society and secret life of vice led by many of its members. The world's greatest works of literature are now avaialble in these beautiful keepsake volumes. Bound in real cloth, and featuring gilt edges and ribbon markers, these beautifully produced books are a wonderful way to build a handsome library of classic literature. These are the essential novels that belong in every home. They'll transport readers to imaginary worlds and provide excitement, entertainment, and enlightenment for years to come. All of these novels feature attractive illustrations and have an unequalled period feel that will grace the library, the bedside table or bureau.

A lush, cautionary tale of a life of vileness and deception or a loving portrait of the aesthetic impulse run rampant? Why not both? After Basil Hallward paints a beautiful, young man's portrait, his subject's frivolous wish that the picture change and he remain the same comes true. Dorian Gray's picture grows aged and corrupt while he continues to appear fresh and innocent. After he kills a young woman, "as surely as if I had cut her little throat with a knife," Dorian Gray is surprised to find no difference in his vision or surroundings. "The roses are not less lovely for all that. The birds sing just as happily in my garden."

As Hallward tries to make sense of his creation, his epigram-happy friend Lord Henry Wotton encourages Dorian in his sensual quest with any number of Wildean paradoxes, including the delightful "When we are happy we are always good, but when we are good we are not always happy." But despite its many languorous pleasures, The Picture of Dorian Gray is an imperfect work. Compared to the two (voyeuristic) older men, Dorian is a bore, and his search for ever new sensations far less fun than the novel's drawing-room discussions. Even more oddly, the moral message of the novel contradicts many of Wilde's supposed aims, not least "no artist has ethical sympathies. An ethical sympathy in an artist is an unpardonable mannerism of style." Nonetheless, the glamour boy gets his just deserts. And Wilde, defending Dorian Gray, had it both ways: "All excess, as well as all renunciation, brings its own punishment."

Oscar Wilde's only published full length novel, is the story of a man who sells his soul for eternal youth. In exchange, what does he give up and what does he gain? This novel, by Wilde is a wonderful soul-searching example of the cost of paradise, and the price of a wish.

Read by actor, comedian, novelist, journalist, screenwriter Stephen Fry, Dorian Gray's dilemma comes alive. He has also acted in a variety of films including A Fish Called Wanda, Peter's Friends, and The Wind in the Willows.

Shipping: US$ 8.09
From United Kingdom to U.S.A.
Destination, rates & speeds