Items related to Cornwall: A History 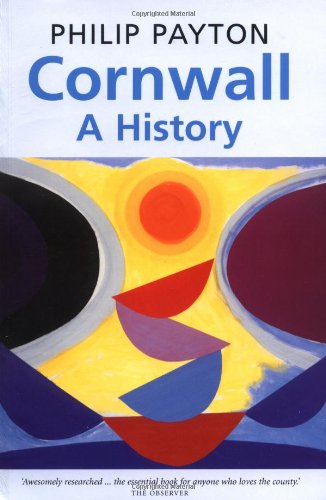 Cornwall - A History is essential reading for everyone with a passion for, or a passing interest in, Cornwall. Meticulously researched and wide-ranging in its chronological span and subject matter, it examines the distinctive story of Cornwall and the Cornish people with both passion and objectivity. Its authoritative and approachable text covers the county's history from the earliest records to a view of the future. The beautifully produced book is illustrated with newly commissioned line drawings by Eric Thomas.

Philip Payton is Professor of Cornish Studies at the University of Exeter in Cornwall, where he is Director of the Institute of Cornish Studies. The author/editor of some thirty books, both academic and popular, he has written widely on Cornish subjects. He edits Cornish Studies, a series of academic papers which has established the Institute as an energetic centre of social, political and historical study. Philip Payton is a Fellow of the Royal Historical Society and the Royal Society of Arts. Formerly a serving naval officer, he holds the rank of Commander in the Royal Naval Reserve and has seen recent active service aboard the aircraft carrier HMS Ark Royal. He lives with his family near Bodmin.

'Payton brilliantly brings together myth, fact, people, places, events...gripping' The Times 'Awesomely researched...the essential book for anyone who loves the county' The Observer 'One of the most comprehensive studies (by one of the most learned scholars) of Cornwall and the nature of Cornish identity ever undertaken' Cornwall Today "The history of Cornwall is shaped by its landscape and the rocks and minerals that are such a vital part of that history. The book therefore begins with the ancient stones. It was a joy to start here and relive some of this history, but there was some sadness as I learned that the priceless mineral collection of my alma mater, the Camborne School of Mines, has been split among three other collections in Cornwall (p.9). As people move into what is now Cornwall we learn about the facts and the legends of the Stone Age; the mystery of the Celts; the impact of the Romans, Anglo-Saxons, Vikings and Normans. And of course, where do the legends of Arthur fit into this picture? What the author does exceedingly well here and throughout the book is to bring modern scholarship to bear, explaining what the current thinking is while being up-front about the alternatives, who is saying what, and how thinking has changed over time. These options are well footnoted for those wanting further reading. Much English history has seen England as one homogeneous unit. The chapter "Anglia et Cornubia" shows how during the Middle Ages the relationship between England and Cornwall was complex, close, but where Cornish distinctiveness was important (which hasn't changed in some circles). The role of the Duchy of Cornwall, founded in this period for the maintenance of the heir to the English throne, bound Cornwall tightly into the operations of the English throne. However, there have been tensions and rebellions (1497 and 1549); the causes and players involved are all described in detail. Later, we see how the creation of modern Cornwall took place under the Tudors. We read about the dislocation and uncertainty of the Civil War and the Glorious Revolution; the emergence in the late seventeenth and eighteenth centuries of a new Britain in which Cornwall was to play a significant role, both because of its mineral wealth and because of its people. For North Americans, we learn about how the lack of coal, and the fluctuations within the copper and tin mining in Cornwall, lead to large scale migrations all over the world. We are reminded of the expression that "wherever there is a hole in the ground there will be a Cornishman at the bottom of it." It is not included in the index, but the book does mention the miners coming in the 1830s to work the lead deposits of Wisconsin with over 9,000 Cornish in Mineral Point by 1850 (p.225), and the migration from Mineral Point and Cornwall to work the "Copper Rush" of the Keweenaw district of Upper Michigan in 1843 and 1844. Other migrations around the world are mentioned briefly. The book concludes by discussing the ways in which Cornwall is changing and adapting after the decline and collapse of the mining industry. We learn about the tourists, politicians, Celtic revivals, Cornish language, new industries and much more all bringing us up to the present. There is a good index, lots of footnotes but unfortunately no compiled bibliography. Many Bigwill members have Cornish ancestors and this is a superb, one-volume, critical history of the county that I can recommend highly." Bigwill News