Items related to Unleash Your Creativity : Secrets of Creative Genius... 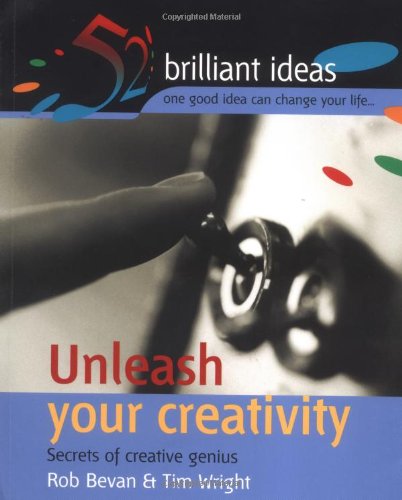 "Isn't being creative something you're born with, like blonde hair or blue eyes? Can we really show you how to be a creative genius? Well in our experience, most people are amazed to discover just how creative they can be. So how do you find the real, inspiring, creative you? It's a question of mindset. It's cutting through the blinkered thinking that everyday life tends to throw at you. We've seen people transform themselves simply by being in the right environment, with the right people and learning a few simple techniques. "Unleash your Creativity" will teach you how to make those ideas explode!" - Rob Bevan and Tim Wright. What's it about? In "Unleash your Creativity", Rob and Tim offer practical but inspiring ideas that will help us discover our inner creative genius and get those juices flowing. With their guidance, readers can build into their professional and personal life, techniques that will transform the way they think. In "Unleash your Creativity", Rob and Tim colourfully reveal how to: discover creativity in the workplace - getting the best from yourself and your team; find the best surroundings to be creative; battle with thinker's block; empower your mind with mental exercises; put your creative genius into practice; and work with others for collective genius. Explore and exploit your innate creativity using Rob and Tim's 52 brilliant ideas!

Tim Wright trained as a journalist and editor on various magazines and newspapers, including Which Computer?, The Independent, and Sunday Times. In 1999, Tim and his creative collaborator Rob Bevan formed XPT, an award winning digital media company. Tim has been the lead writer of two BAFTA-winning interactive projects - the comedy self help disk 'MindGym' and Web & email drama 'Online Caroline', as well as co-developing & devising the lunatic Web 'holiday' 'Mount Kristos', the absurd virtual gift-giving service 'IT3C' and the BAFTA nominated science-learning Web drama, 'Planet Jemma'. Rob Bevan has nearly fifteen years' experience in development, design, programming and production of award-winning multimedia, interactive and online projects. Rob was designer for three years at The MultiMedia Corporation, formerly the BBC's original Interactive Television Unit. In 1994 Rob co-founded NoHo Digital, one of the UK's leading new media companies, where he was Creative Director for 4 years. There he developed and worked on a large variety of corporate and entertainment products, including MindGym, an ironic self-help quiz on CD-ROM, which in 1998 was the first ever BAFTA award winner for the best use of comedy in an interactive entertainment title.

Shipping: US$ 7.31
From United Kingdom to U.S.A.
Destination, rates & speeds