Items related to Dear Sibelius: Letter from a Junky

Dear Sibelius: Letter from a Junky 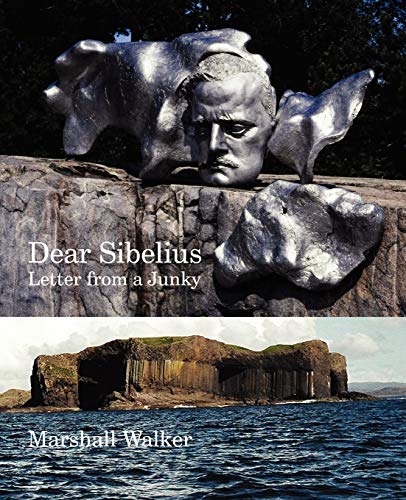 When a schoolboy in Glasgow, Marshall Walker became addicted to the music of Sibelius. In 1996 he made a pilgrimage to Finland, visiting places of special significance to the composer, his birthplace in Hämeenlinna, the villa 'Ainola' where he lived for over 50 years, the forests and lakes near Koli in the Karelia. Back home in New Zealand Walker began to write Sibelius a thank-you letter for a lifetime's companionship. Walker tells Sibelius how his music helped him overcome childhood ordeals in Scotland. He discovers Sibelian connections in his family, tracing the steps of his grandfather from a Sunday stroll in a Glasgow park to the Elliot Junction railway disaster of 1906 and commemorating his uncle's service on the Salonika front in WWI. The scene shifts to student days at Glasgow University, problems with God, the kindness of the Scottish conductor, Ian Whyte, and the music of Arnold Bax, Sibelius's 'son in music'. In apartheid South Africa Sibelius becomes Walker's medicine man. There's a glimpse of the composer fęted in the USA and a connection between his music and the American writer, Robert Penn Warren. A child falls in love with Sibelius's Third Symphony. From New Zealand Walker sets out on the compulsive pilgrimage which prompts him to try to show how an artist can be a continuous, sustaining presence in a life. There's talk of Sibelius's music throughout the letter - a grateful junky's talk, not a critic's. 'You have taught me about Sibelius.' Osmo Vänskä 'A true writer. Excellent. I must repeat, excellent.' Lygia Fagundes Telles 'Compellingly human stories in a masterly fusion of music and life'. Hugh Macdonald Marshall Walker was born and educated in Scotland where he is currently Senior Research Fellow in the Department of Scottish Literature at the University of Glasgow. He lectured in English at Glasgow University from 1965 to 1980 after a spell at Rhodes University in South Africa. From 1981 until 2006 he was Professor of English at the University of Waikato in Hamilton, New Zealand with time out for visiting appearances in the USA, Poland, Germany, Italy and Brazil. His publications include The Literature of the United States of America and Scottish Literature since 1707. An occasional broadcaster on literary and musical topics for Radio New Zealand and the Australian Broadcasting Corporation, he introduced broadcasts of the 2005 Sydney Sibelius Festival in which Sibelius's symphonies were performed by the Sydney Symphony Orchestra conducted by Vladimir Ashkenazy. He lives in Hamilton, New Zealand, with his Brazilian wife, the writer, Cláudia Pacce.

'Dear Sibelius is an autobiography, a sampler of poetry..., and a detailed exposition of all the major works of Jean Sibelius, the composer who has been Marshall Walker's deepest artistic companion for most of his life. It is a testament to how the work of artists and poets, and especially this particular composer, can help you to live.'Alan Riach, P N Review 185, 2009. 'Walker might have come full circle geographically in his exploration of Sibelius' music, but his own personal voyage of discovery is ongoing. This humorous account of his journey, peppered with an array of tangential literary references, tells us as much about Walker as it does about the life of a great composer.' Susan Nickalls, Classical Music, 21 June 2008. 'The book is rich in incident and references, and committed in its politics.' William Dart, The New Zealand Herald, March 27 2008.

1. Dear Sibelius: Letter from a Junky (Paperback or Softback)

2. Dear Sibelius: Letter from a Junky

3. Dear Sibelius: Letter from a Junky

4. Dear Sibelius: Letter from a Junky

5. Dear Sibelius: Letter from a Junky

6. Dear Sibelius: Letter from a Junky