Items related to A Matter Of Survival

Monadjemi, Lily A Matter Of Survival

A Matter Of Survival 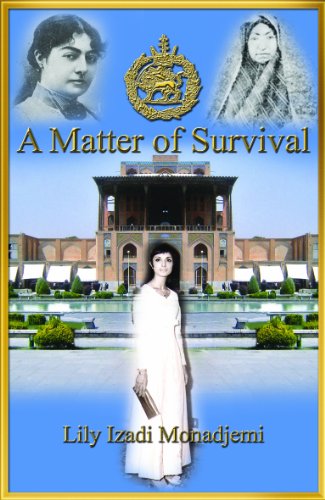 When Khatoon, met Shah Sultan Hussain Safavids under most unusual circumstances she was only a daring audacious fourteen years old girl whose large sparkling black eyes stole the shah's heart. Soon she found her way to the Royal Andaroon becoming the most valued and envied wife of the Sultan. Then suddenly she was given as a gift to Fath Ali, the chief of the Gajar tribe and sent to Astarabad where the Gajars lived.This book is the saga of Khatoon and her off-springs recounted by Lily Izadi Monadjemi, a great grand daughter of Nassir al-Din shah Gajar who reigned in Iran for fifty years. She offers a unique perspective of how the eunuch grand son of Khatoon, managed to unite a feudal Iran under the Gajar banner and prevent Iran from being disintegrated by the whirlwind of Imperialism that was sweeping across the Middle East and Asia.Monadjemi , with her special focus on the brave, intelligent king-maker women of her family gives us a meticulous analysis of the institution of monarchy in modern Iran and how it withstood and adjusted to the challenges of modern times. She extensively covers the life of her female ancestress' who exercised immense influences on their husbands and through them on Iranian society. She illustrates the characters of these incredible women with total honesty and at times great humors. She makes us understand, appreciate and respect the female power within Iranian family and society. She gives us a detailed account of Nasir al-Din shah's private life, career, his sad upbringing, his complex personality, and his political conduct that saved Iran from being divided between the almighty British in the South and the aggressive Russians in the North. Then we are swiftly taken through the Iranian Constitutional Revolution, the fall of the Gajars, the rise of Reza Shah and subsequently the rise and success of Ayattollah Khomaini and his Islamic Republic. She introduces to us the true character of the man who was able to topple one of the most ancient monarchies of the world and tells us how his regime was able to change a progressive society to what it is now. With her particular shrewdness Monadjemi takes us through all these drastic changes and then leaves us admiring her penchant for survival.

Lily Izadi Monadjemi was born in Iran. She was educated in England and United States. She holds a Bachelors degree in Social Welfare and a M.A in Educational Psychology. In Iran she worked as a social worker at the then Reza Pahlavi hospital and taught English at the School of Humanities at the then National University of Iran.

1. A Matter Of Survival