Hywel Francis History on Our Side: Wales and the 1984-85 Miners' Strike 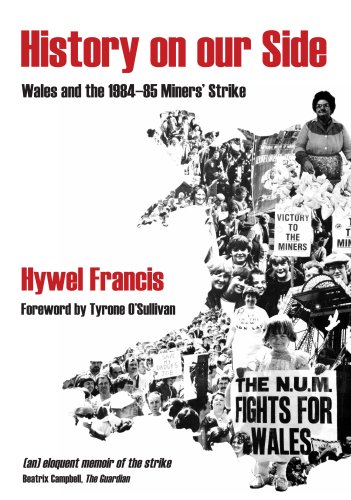 A history of Wales during the period of the 1984/85 Miners' Strike. It is at times an intensely personal account and at others a considered and retrospective view. The Miners' Strike was a momentous incident in the political and industrial history of the western world. But across Wales it had a far more significant and integral effect upon the whole of society, marking a change in social history that is still felt in the way twenty-first century society is ordered in the UK. The book is published on the twenty-fifth anniversary of the strike.

Hywel Francis has been inextricably linked to the South Wales mining community all his life. He and his wife, Mair, and all their children, Hannah, Dafydd and Sam, were all active participants in campaigning in support of the miners cause in 1984 85. Towards the end of the strike, Mair was the prime mover in the setting up of DOVE, a women s training workshop at Banwen that grew out of the local women s support group in the Dulais Valley. She is now its president and recently published its history, Up the DOVE!(2008). Hywel Francis was born in the mining community of Onllwyn in the Dulais Valley, the first in five generations (on both sides of the family) not to go underground . His father, Dai Francis, was the general secretary of the South Wales Area of the NUM (1963 76) and the first chair of the Wales TUC (1975). With Dai Smith, Hywel was the official historian of the miners union, publishing The Fed: A History of the South Wales Miners in the Twentieth Century (1980, reprinted 1998). He also published Miners Against Fascism: Wales and the Spanish Civil War (1984, reprinted 2004). He was the founder in 1973 of the South Wales Miners Library at Swansea University and an organiser of trade union day release courses for the NUM (1975 90) and community education programmes in the valleys which culminated in the creation of the Valleys Initiative for Adult Education (1987) and the Community University of the Valleys (1993). During the miners strike he was chair of both the Neath Dulais and Swansea Valleys Miners Support Group and the Wales Congress in Support of Mining Communities and was on the editorial board of Marxism Today. He wrote extensively on the strike in such diverse journals as Barn, Y Faner, Marxism Today, New Socialist and The New Statesman, as well as chapters in Striking Back (1985). He was made a member of the Gorsedd of the National Eisteddfod in Cardigan in 1986 in recognition of his writing and campaigning for the South Wales miners. He has been Labour MP for Aberavon since 2001. He is currently chair of the Select Committee on Welsh Affairs and a trustee of the Bevan Foundation, the independent social justice think tank. Before entering Parliament he was Professor of Continuing Education at Swansea University.

Hywel Francis is a rare being - a scholar activist whose historical research is also a quest for good politics and for emancipating solidarities. This is his story of South Wales miners' stalwart contribution to the historic1984-5 strike - when women created the means of survival not only for the men but also for entire communities. He brings both insider insights and a wide, humane focus to that fateful year, and the inevitable defeat; the valleys fell silent, but the creative alliances of '84-85 infused new politics in Wales. Beatrix Campbell Award-winning Journalist, Author, Broadcaster, Guardian, Independent, New Statesman ...it is really good; the right tone and the right interpretation! Excellent... Professor Deian Hopkin Vice chancellor, London South Bank University This book is both a retelling of the coal struggle and the struggle for coal. He mines a rich seam of the personal and political, unearthing complexity and heartache Menna Elfyn Internationally renowned Welsh poet Hywel Francis is both historian-as-witness and activist-as -historian in this engrossing account and personal recapture of the Miners' Strike of 1984/5 Professor Dai Smith The Raymond Williams Research Chair in the Cultural History of Wales at Swansea University.

Book Description Parthian Books, 2009. Paperback. Condition: Used; Good. **Simply Brit** Shipped with Premium postal service within 24 hours from the UK with impressive delivery time. We have dispatched from our book depository; items of good condition to over ten million satisfied customers worldwide. We are committed to providing you with reliable and efficient service at all times. Seller Inventory # 3052348

Book Description Paperback. Condition: Very Good. The book has been read, but is in excellent condition. Pages are intact and not marred by notes or highlighting. The spine remains undamaged. Seller Inventory # GOR004469724

Shipping: US$ 16.07
From United Kingdom to U.S.A.
Destination, rates & speeds