Items related to The Russian Court at Sea

The Russian Court at Sea 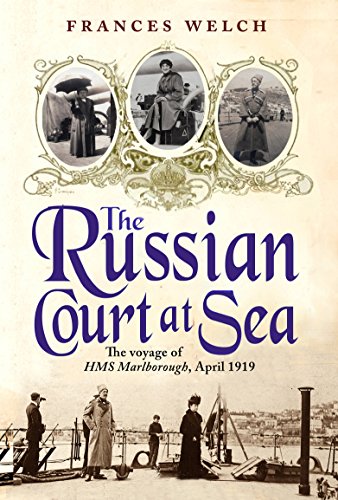 On 11th April 1919, less than a year after the assassination of the Romanovs, the British battleship HMS Marlborough left Yalta carrying twenty members of the Russian Imperial Family into perpetual exile. They included the Tsar's mother, the Dowager Empress Marie, and his sister, the Grand Duchess Xenia, Prince Felix Youssupov, the murderer of Rasputin and a man once mooted as a future leader of Russia, and Grand Duke Nicholas, once Commander-in-Chief of the Russian Armies. As the ship prepared to set sail, a British sloop carrying 400 White Russian soldiers drew up alongside. The soldiers stood on deck and sang the Russian National Anthem. It was the last time the anthem was ever sung to members of the Imperial Family with Russian territory. The Dowager Empress stood on deck alone. According to the HMS Marlborough's First Lieutenant, nobody dared to approach her. The Russian Court at Sea vividly recreates this unlikely voyage, with its bizarre assortment of warring characters and its priceless cargo of treasures including rolled-up Rembrandts and Faberge eggs - for they were a family riven with hostility and mutual resentment. It is a story, by turns exotic, comic and doomed, of an extraordinary group of people caught up in an extraordinary moment in history when their lives were in every way at sea.

Frances Welch has written for the Sunday Telegraph, Granta, The Spectator and the Financial Times. She is co-author of Memories of Revolution: Russian Women Remember (Routledge, 1993), The Romanov & Mr Gibbes (Short Books, 2003) and A Romanov Fantasy: Life at the Court of Anna Anderson (Short Books, 2007) She is married to the writer Craig Brown, and has two children. She lives in Aldeburgh, Suffolk.

"A jewel of a book - In its quirkiness and sheer unlikeliness - Popular history writing at its cleverest and most enjoyable best." Mail on Sunday "A masterpiece of comic understatement" The Times "Welch writes with a limpid style and a cool intelligence" Sunday Telegraph "I was hooked from page one - this is cumulatively moving - a real triumph of sympathy" AN Wilson "The kind of history that makes fiction look pallid and pointless - " --Evening Standard "A gripping account of the Romanovs choppy passage into exile. Welch s detective work has produced a book that is wonderfully witty and sad by turns." --Mail on Sunday "The book's readability and telling use of detail are splendid." --Spectator "a splendidly exotic story ... Frances Welsh does it grippingly here, with lots of details I hadn't come across before. I loved to read of the goods they brought with them, including rolled-up Rembrandt paintings, Faberge eggs and other treasures of the sort. What a pilgrimage, to be sure." --Sunday Telegraph "A fascinating, poignant portrait of a bizarre collection of people caught up in the chaos of their exodus" --Irish Times "The book s readability and telling use of detail are splendid." --Spectator

1. The Russian Court at Sea: The Voyage of HMS Marlborough, April 1919

2. The Russian Court at Sea

3. The Russian Court at Sea