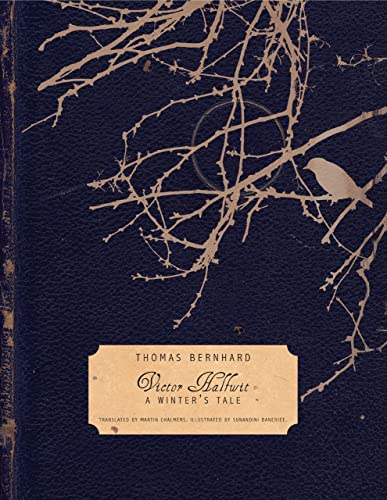 One night in the middle of winter, as deep snow covers the mountains and forests, a doctor is crossing the ridge in Austria from Traich to Föding to see a patient. He stumbles over a body in the darkness and fears it is a corpse. But it’s not a corpse at all. In fact, it’s wooden-legged Victor Halfwit, collapsed, but still very much alive. So begins this simultaneously absurd and tragic tale by celebrated Austrian playwright, novelist, and poet Thomas Bernhard. Combining the darkly comic voice and vision of Bernhard with the lush and beautiful collages of Indian designer Sunandini Banerjee, Victor Halfwit is a unique and collectible artist’s book. Illustrated in color throughout, this edition imaginatively presents Bernhard’s fable in a distinctive and unconventional style. It is the perfect gift book that will be cherished by fans of Bernhard’s other works and will inspire new interest among visual artists.

Thomas Bernhard (1931–89) grew up in Salzburg and Vienna, where he studied music. In 1957, he began a second career as a playwright, poet, and novelist. He went on to win many of the most prestigious literary awards of Europe. Martin Chalmers is a translator and editor whose translations include works by Hubert Fichte, Ernst Weiss, Herta Müller, Alexander Kluge, Emine Sevgi Özdamar, and Erich Hackl.

"The feeling grows that Thomas Bernhard is the most original, concentrated novelist writing in German. His connections... with the great constellation of Kafka, Musil, and Broch become ever clearer." - George Steiner, Times Literary Supplement "What is extraordinary about Bernhard is that his relentless pessimism never seems open to ridicule; his world is so powerfully imagined that it can seem to surround you like little else in literature." - New Yorker"