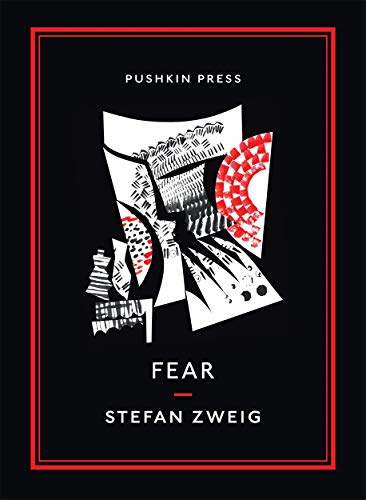 Finding her comfortable bourgeois existence as wife and mother predictable after eight years of marriage, Irene Wagner brings a little excitement into it by starting an affair with a rising young pianist. Her lover’s former mistress begins blackmailing her, threatening to give her secret away to her husband. Irene is soon in the grip of agonizing fear.
Written in the spring of 1913, and first published in 1920, this novella is one of Stefan Zweig’s most powerful studies of a woman’s mind and emotions.

La Paura (1954) the Roberto Rossellini film based on the Stefan Zweig novel Fear was the last of the extraordinary features in which Rossellini directed Ingrid Bergman, who was then his wife.

Pushkin Collection editions feature a spare, elegant series style and superior, durable components. The Collection is typeset in Monotype Baskerville, litho-printed on Munken Premium White Paper and notch-bound by the independently owned printer TJ International in Padstow. The covers, with French flaps, are printed on Colorplan Pristine White Paper. Both paper and cover board are acid-free and Forest Stewardship Council (FSC) certified.

Stefan Zweig was born in 1881 in Vienna, a member of a wealthy Austrian-Jewish family. He studied in Berlin and Vienna and was first known as a translator and later as a biographer. Zweig travelled widely, living in Salzburg between the wars, and enjoying literary fame. His stories and novellas were collected in 1934. In the same year, with the rise of Nazism, he briefly moved to London, taking British citizenship. After a short period in New York, he settled in Brazil where in 1942 he and his wife were found dead in bed in an apparent double suicide.

“What did Zweig have that brought him the fanatical devotion of millions of readers, the admiration of Herman Hesse, the invitation to give the eulogy at the funeral of Sigmund Freud? To learn that, we would have to have a biography that illuminated all aspects of his work, that read all of his books, and that challenged, rather than accepted, the apparent modesty of his statements about his life and work.” – Benjamin Moser, Bookforum

"Charts every fluctuation of its heroine’s inner turmoil and ends with an ingenious twist." —Julie Kavanagh, The Economist Intelligent Life

"Brilliant, unusual and haunting enough to ensure that Stefan Zweig’s time of oblivion is over for good. Zweig developed a remarkable literary and psychological method... brought to something like perfection. The story that most clearly exemplifies Zweig’s method is Fear... it’s good to have him back." — Salman Rushdie, The New York Times Book Review

"Zweig belongs with those masters of the novella - Maupassant, Turgenev, Chekhov - of whom he was in awe. He was formidably well read, but in his fiction he is as much at ease with the unlettered as the learned... Stefan Zweig cherished the everyday imperfections and frustrated aspirations of the men and women he analysed with such affection and understanding." — Paul Bailey, Times Literary Supplement

"Touching and delightful. Those adjectives are not meant as faint praise. Zweig may be especially appealing now because rather than being a progenitor of big ideas, he was a serious entertainer, and an ardent and careful observer of habits, foibles, passions and mistakes." — A.O. Scott, The New York Times

"[During his lifetime] arguably the most widely read and translated serious author in the world." — John Fowles