Items related to Saluki, Hound of the Bedouin

Saluki, Hound of the Bedouin 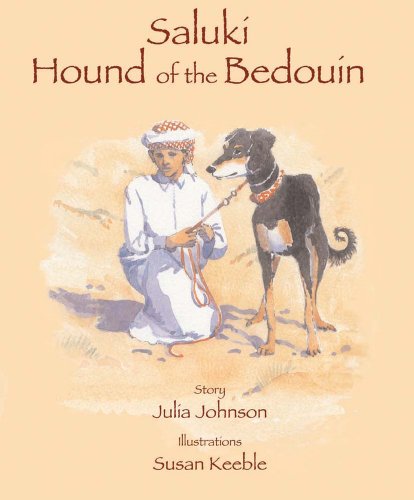 This captivating tale recounts the mutual devotion of the young Bedouin boy Hamad and his Saluki hound, as the former journeys to adulthood. Julia Johnson has done much to keep alive the stories of the Bedouin and their way of life and to bring them to a younger readership in Arabia and throughout the world.

Julia Johnson divides her time between Dubai and an old water mill in Worcestershire, England. A thirst for adventure took Julia and her architect husband Brian to Dubai in 1975, where she soon became a familiar face reading children’s stories on Dubai Channel 33, subsequently appearing in BBC Television and Radio productions in the UK. She has toured schools in the Emirates and the UK in Theatre-in-Education productions, acted in several stage plays and recorded over 100 audio books. Since 2001 she has been writing stories for children. The Pearl Diver is recommended by the Hamilton Trust, an online resource provider for schools. The Leopard Boy was awarded a Kirkus star in America, and was endorsed by former UK Children’s Book Laureate and award-winning author, Michael Morpurgo. The Turtle Secret was the winner of the Best International Children’s Book Award at the Sharjah International Book Fair 2014. Julia loves to write stories about the rich and colourful heritage of the Arabian Gulf and Oman, and she tours the region giving talks and workshops. She also visits schools in the UK, and is a regular speaker at the Emirates Airline Festival of Literature.

Susan Keeble’s distinctive watercolours have been exhibited at galleries internationally, including the Royal Scottish Academy, and the International Guild of Artists in Dubai, where she lived for five years. She is regularly commissioned to paint the Henley Regatta. She and her husband divide their time between their homes in Gloucestershire, the Auvergne and Portugal.

1. Saluki, Hound of the Bedouin

Book Description Stacey International, 2012. Condition: Good. A+ Customer service! Satisfaction Guaranteed! Book is in Used-Good condition. Pages and cover are clean and intact. Used items may not include supplementary materials such as CDs or access codes. May show signs of minor shelf wear and contain limited notes and highlighting. Seller Inventory # 1906768900-2-4

2. Saluki, Hound of the Bedouin (paperback)

3. Saluki, Hound of the Bedouin

4. Saluki, Hound of the Bedouin

Book Description Paperback. Condition: Good. This item shows signs of wear from consistent use, but it remains in good condition and works perfectly. All pages and cover are intact , but may have aesthetic issues such as small tears, bends, scratches, and scuffs. Spine may also show signs of wear. Pages may include some notes and highlighting. May include From the library of labels. Satisfaction Guaranteed. Seller Inventory # 4BQG53004V14_ns