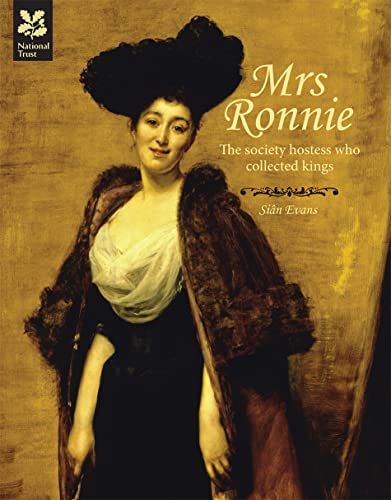 An intriguing illustrated biography of the remarkable Mrs. Greville and her magnificent house, Polesden Lacy—a fascinating life story laced with scandal, wit, and intrigue, set against the backdrop of 80 years of tumultous world events

From obscure and humble origins Margaret Greville rose to become a millionairess and prominent society hostess and friend to a portfolio of royalty and politicians. Following an advantageous marriage to one of Edward VII's best friends, Captain Ronald Greville, Mrs. Greville created two magnificent houses, Polesden Lacy (now National Trust) and 16 Charles Street, Mayfair, taking as her model the opulent luxury of the Ritz Hotel. Mrs. "Ronnie" Greville was instrumental in advancing the courtships of both the Mountbattens and the Duke and Duchess of York, who became King George VI and Queen Elizabeth after the Abdication, and in fact, honeymooned at Polesden Lacy. Among her friends she numbered Edward VII, Queen Mary, George VI and Queen Elizabeth, Oswald Mosley, Ribbentrop, and Mussolini. Her meteoric rise to social prominence was lived against a background of tumultous historic events: the halcyon years of the Edwardian era, the Roaring 20s, the Depresssion, two World Wars, and the London Blitz. Mrs. Ronnie survived for almost eight momentous decades and was in the front row for many of the great moments in history. This is her thrilling story and that of her magnificent house, Polesden Lacy, illustrated many previously unpublished evocative period photographs.

Book Description National Trust Books, 2013. Hardcover. Condition: Good. Small Tears to the Dust Jacket/ Slipcase Good condition is defined as: a copy that has been read but remains in clean condition. All of the pages are intact and the cover is intact and the spine may show signs of wear. The book may have minor markings which are not specifically mentioned. Most items will be dispatched the same or the next working day. Seller Inventory # wbb0012904074

Book Description Paperback. Condition: Very Good. The book has been read, but is in excellent condition. Pages are intact and not marred by notes or highlighting. The spine remains undamaged. Seller Inventory # GOR005401392

Book Description National Trust 2013-07-01, 2013. Hardcover. Condition: Good. Item is in good condition. Some moderate creases and wear. This item may not come with CDs or additional parts including access codes for textbooks. Might be an ex-library copy and contain writing/highlighting. Seller Inventory # DS-1907892389-3