Items related to Cilla Wants Her Teeth Back: Football's Barmiest... 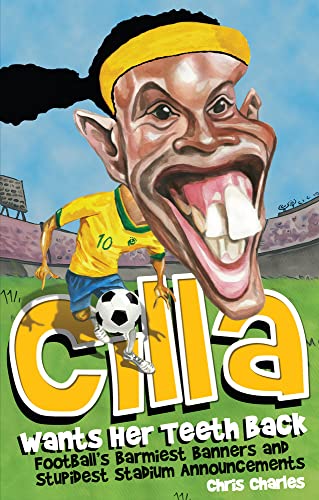 In recent years, homemade banners at soccer matches have become almost as commonplace as scarves and hats. Unhappy with the manager? Want to wind up your opponents? You’re only a sheet and a pot of paint away from getting your message across to a wider audience. And it’s not just the fans who are having their say, with club DJs also putting the boot into the opposition, while warning would-be smokers what will happen to them if they dare light up in the ground. Cilla Wants Her Teeth Back (which takes its name from a message to buck-toothed Brazilian Ronaldinho from Liverpool fans) is a book that for the first time brings together the world’s best banners and strangest stadium announcements. So if you want to know what happened when communism met alcoholism and which team Dick Turpin scored for, sit back and enjoy the ride.

Chris Charles is a freelance journalist who for many years wrote popular, irreverent blogs for the BBC Sport website. He is co-host of the QPR podcast Open All R’s, has appeared as a satellite TV football pundit and has a show on Shoreditch Radio. Chris dreams of the day QPR add another trophy to their 1967 League Cup success. Could be a long wait.