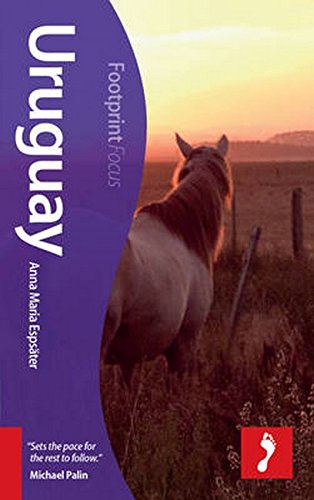 Stroll around the World Heritage Site Colonia del Sacramento and you will feel like you have travelled back in time: 17th colonial buildings grace the historic section, while the lively modern town extends around a bay. Go by horseback across the country’s rolling hills and stay overnight at a country estate. From historic gems to thermal springs, from charming riverside towns to gorgeous beach resorts: Uruguay is ideal for adventurous and leisurely visitors alike. Footprintfocus Uruguay also features detailed coverage of Buenos Aires, the main gateway to the country, plus comprehensive listings on where to eat, sleep and have fun.

·          Essentials section with practical advice on getting there and around.

Loaded with advice and information, this concise Footprintfocus guide will help you get the most out of Uruguay without weighing you down.

The content of the Footprintfocus Uruguay guide has been extracted from Footprint’s South America Handbook.

Footprint Focus travel guides are specially designed for the needs of today’s travelers. Uruguay provides you with all the information you need and none of the stuff that you don’t.

·         Insightful, in-depth and up-to-date information on this fascinating country

·         Gives the lowdown on the Argentine capital, Buenos Aires

·         Extensive listings and expert advice on where to stay, where to eat and what to do

One of the first assignments Ben Box took as a freelance writer in 1980 was subediting work on the South American Handbook. The plan then was to write about contemporary Iberian and Latin American affairs, but in no time at all the lands south of the Rio Grande took over, inspiring journeys to all corners of the subcontinent. Ben has contributed to newspapers, magazines and learned tomes, usually on the subject of travel, and became editor of the South American Handbook in 1989. He has also been involved in Footprint's Handbooks on Central America & Mexico, Caribbean Islands, Brazil, Peru, Cuzco & the Inca Heartland, and Peru, Bolivia and Ecuador. On many of these titles he has collaborated with his wife and Footprint Caribbean expert, Sarah Cameron.Having a doctorate in Spanish and Portuguese studies from London University, Ben maintains a strong interest in Latin American literature. In the British summer he plays cricket for his local village side and year round he attempts to achieve some level of self-sufficiency in fruit and veg in a rather unruly country garden in Suffolk.

Book Description Footprint Handbooks, 2014. Condition: Good. Second. Ships from Reno, NV. Former Library book. Shows some signs of wear, and may have some markings on the inside. Seller Inventory # GRP109412229

Book Description Footprint Handbooks. Paperback. Condition: GOOD. Spine creases, wear to binding and pages from reading. May contain limited notes, underlining or highlighting that does affect the text. Possible ex library copy, will have the markings and stickers associated from the library. Accessories such as CD, codes, toys, may not be included. Seller Inventory # 3100878123

Book Description Footprint Handbooks, 2014. Paperback. Condition: Good. Connecting readers with great books since 1972. Used books may not include companion materials, some shelf wear, may contain highlighting/notes, may not include cdrom or access codes. Customer service is our top priority!. Seller Inventory # S_272442537

Book Description Footprint Handbooks, 2014. Condition: Good. A+ Customer service! Satisfaction Guaranteed! Book is in Used-Good condition. Pages and cover are clean and intact. Used items may not include supplementary materials such as CDs or access codes. May show signs of minor shelf wear and contain limited notes and highlighting. Seller Inventory # 1909268720-2-4

Book Description Footprint Travel Guides, 2014. Paperback. Condition: Good. Ex library copy with usual stamps/stickers Good condition is defined as: a copy that has been read but remains in clean condition. All of the pages are intact and the cover is intact and the spine may show signs of wear. The book may have minor markings which are not specifically mentioned. Most items will be dispatched the same or the next working day. Seller Inventory # wbb0012728379