Items related to The Doctor of Pimlico

The Doctor of Pimlico 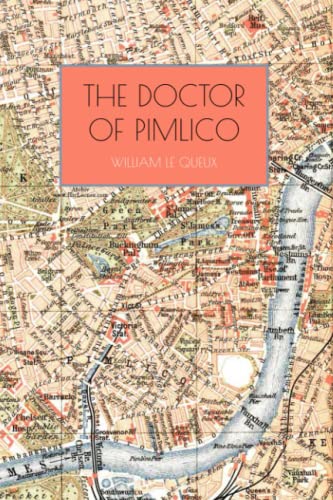 Walter Fetherston was a writer of breathless mystery but he was the essence of mystery himself. Once the reader took up a book of his he never laid it down until he had read the final chapter. You, my reader, have more than once found yourself beneath his strange spell. And what was the secret of his success? He had been asked by numberless interviewers, and to them all he had made the same stereotyped reply: “I live the mysteries I write.”

Writer of detective stories, Walter Featherston is himself a mystery to all his friends. To some he’s a seasoned traveller known in society circles all over the continent. To the police he is known as “Mr Maltwood” with ready access to the upper echelons of Scotland Yard and the Sûreté Générale in Paris, his knowledge of criminology and his success in the pursuit of criminals recognised internationally.

The Doctor of Pimlico is Dr Weirmarsh, by vocation a practicing surgeon on the Vauxhall Bridge Road, close to Victoria Station but by avocation, controller of an international gang of master criminals, engaged in schemes of remarkable ingenuity, unscrupulously using General Sir Hugh Elcombe to his own ends with Elcombe’s step-daughter, Enid, unable to escape his hypnotic clutches too. Who is the mysterious doctor of Pimlico, and what is the strange hold that he has over people?

How the evil machinations of the scoundrel Weirmarsh and his gang are thwarted by Featherston and Enid, together with the skilful use of double personalities, make this, the second in our London Bound series, a compelling and entertaining thriller from a renowned master of the mystery.

Make sure you check out the other two in the series:

LONDON BOUND – A series of classic crime novels, largely from the Golden Age of detective fiction, faithfully transcribed, re-set and reprinted by Oleander under the series name London Bound - owing, unsurprisingly, to their all being set in the nation's capital. The Series Editor, Richard Reynolds, is a CWA Dagger judge and crime specialist at the world-famous Heffers Bookshop in Cambridge. Period-style covers for each, whilst honouring the original, have been designed from scratch by Ayshea Carter, designer at the Fitzwilliam Museum, Cambridge. Beautifully produced in a completely re-set, softback edition. A joy to read and to own.

William Tufnell Le Queux (1864-1927) was a journalist, writer, diplomat and traveller. In 1893 he became a full time writer with over one hundred and fifty novels and short stories of espionage, thrillers and detective novels to his name, many of which reflect the urgency and pace of his journalistic style. His prolific output earned him the nickname “the master of mystery”.

1. The Doctor of Pimlico

Book Description Paperback. Condition: Very Good. The book has been read, but is in excellent condition. Pages are intact and not marred by notes or highlighting. The spine remains undamaged. Seller Inventory # GOR006491382