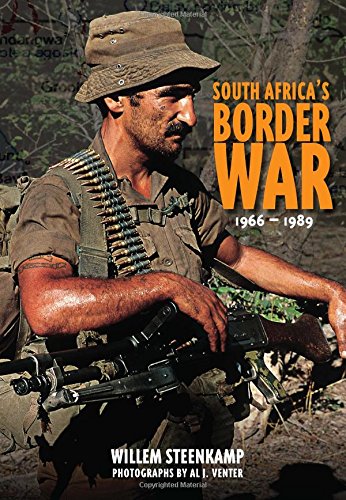 Of all the books about South Africa’s 21-year ‘Border War’ - fought on both sides of Angola’s frontier with present-day Namibia - South Africa’s Border War has always been rated as among the best. A significant, full-color volume, it originally sold 31,000 copies in South Africa alone and has been out of print for decades.

This version is the first reissue of the original, written by Willem Steenkamp. Almost all the photos were taken by Al J. Venter who covered that conflict intermittently for almost two decades.

Both Steenkamp and Venter have gone on to produce other works on that bitter conflict, but neither they nor anybody else has been able to match this beautiful coffee-table volume. Both agree that the book should be regarded as a tribute to a generation of fighting men, where sons often followed in the footsteps of their fathers, serving in the same units a generation apart.

Though South Africa’s ‘Border War’ started slowly with the first major clash of the conflict taking place on South West African soil at Omugulugwombashe in August 1966, hostilities escalated steadily, to the point where Moscow provided the Marxist Luanda government with all the military hardware it needed. Tens of thousands of Cuban troops were drafted into Angola after Portugal had abandoned its African territories.

The conflict then entered several conventional phases that involved long-range South African armored strikes into Angola’s interior and several major tank battles that eventually brought hostilities to an end. Luanda by then had already used chemical weapons on a limited scale and Pretoria was considering deploying its newly developed nuclear arsenal.

Willem Steenkamp, a seasoned war correspondent, covers all these historical issues in South Africa’s Border War, as well as ancillary military strikes in several other black African countries that included Zambia and Mozambique.

The book is exceptionally well illustrated, with hundreds of color as well as black-and-white photos; truly a valuable addition to recent African military history.

Willem Steenkamp has been a journalist, soldier, writer of fact and fiction, military tattoo producer and specialist tour guide. A military reservist, he was called up for military service on various occasions from 1976 onwards and took part in four external operations, including an attachment to 61 Mech on its first real test of strength: 1980s 'Operation Sceptic'. After the end of the border conflict in 1989, he served on a presidential advisory council and as a security advisor during the 1994 election, as well as helping to write the seminal 1996 Defence Review. Subsequently, he was a consultant to the SA National Defence Force and Ministry of Defence on several occasions. He is the author of 18 factual books and novels, co-writer of a stage play and two television scripts, and has won three literary prizes.

Al J. Venter is a specialist military writer and has had 50 books published. He started his career with Geneva’s Interavia Group, then owners of International Defence Review, to cover military developments in the Middle East and Africa. Venter has been writing on these and related issues such as guerrilla warfare, insurgency, the Middle East and conflict in general for half a century. He was involved with Jane’s Information Group for more than 30 years and was a stringer for the BBC, NBC News (New York) as well as London’s _Daily Express_ and _Sunday Express_. He branched into television work in the early 1980s and produced more than 100 documentaries, many of which were internationally flighted. His one-hour film, _Africa’s Killing Fields_ (on the Ugandan civil war), was shown nationwide in the United States on the PBS network. Other films include an hour-long programme on the fifth anniversary of the Soviet invasion of Afghanistan, as well as _AIDS: The African Connection_, nominated for China’s Pink Magnolia Award. His last major book was _Portugal’s Guerrilla Wars in Africa_, nominated in 2013 for New York’s Arthur Goodzeit military history book award. It has gone into three editions, including translation into Portuguese.

"This book is a re-issue of a popular nineteen-nineties publication regarding the decades-long South African border war with what is now called Namibia. Journalist Willem Steenkamp and photojournalist Al J. Venter cover all aspects of the evolving conflict from 1966 to 1989. The text is broken up into two parts covering the war’s beginning and ending, and the war in close-up. Throughout, the journalists concern themselves not only with the troops fighting the war, but the environment and indigenous peoples caught in the crossfire of a war that received backing from the Soviet Union on one side and saw the involvement of Cuba, the use of chemical weapons, and the contemplated use of South Africa’s newly created nuclear arsenal." (ProtoView)