Items related to The Border 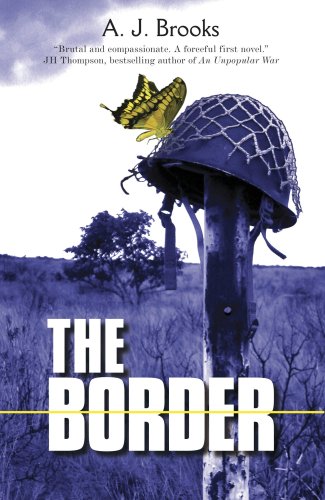 “There was an odd combination of anxiety and reluctant anticipation prevalent among the new troops as they made final preparations. Their dismay was evident as the section leader discarded most of the food-carrying compartments and altered the webbing to carry at least seven water bottles and as many magazine pouches. The harsh reality of Ovamboland thwarted the infantry school’s textbook, for this was war... war in a thirsty land.”

The Border is a racy drama set against the backdrop of southern Africa’s border wars in the 1980s. This is a tale of intertwined lives; hatred, trauma and the horror of war forcing each to strangle some sense, some purity out of the world they now find themselves in while teetering on the border of their own sanity. An ordinary soldier fights for survival. A family torn apart by the brutality of war. Two women’s struggle to overcome the horrors they have experienced at the hands of the terrorists. A power-hungry brigadier whose personal failures cause untold disaster for his family and for the soldiers in whose hands they place their lives. But among the death and dust Corporal Kent finds himself enigmatically drawn toward a woman recently widowed by the very insurgents he fights against.

AJ BROOKS matriculated, surprisingly, in 1978 and was called up in 1979 to 14th Field Regiment in Potchefstroom for his two years’ compulsory national service. He was transferred to the School of Artillery where he became an instructor as he felt he’d rather shout at people than be shouted at. It was here that his interest in guns and vintage artillery pieces was nurtured. He later served with 7th Medium Regiment for his first Citizen Force, or territorial, duties. In 1993 AJ was transferred to the Transvaal Horse Artillery where he was promoted to the rank of warrant officer and BSM of 9th Battery. Further tours of duty to the Army Battle School and Potchefstroom ensued before his resignation in 2003. AJ is married to Brenda and has two children. He lives in Johannesburg. His first book, The Border, was published in 2007 and is being made into a major feature film.

Book Description 30 Degrees South Publishers, 2007. Paperback. Condition: Good. Good condition is defined as: a copy that has been read but remains in clean condition. All of the pages are intact and the cover is intact and the spine may show signs of wear. The book may have minor markings which are not specifically mentioned. Most items will be dispatched the same or the next working day. Seller Inventory # mon0011550114

Book Description Paperback. Condition: Very Good. The book has been read, but is in excellent condition. Pages are intact and not marred by notes or highlighting. The spine remains undamaged. Seller Inventory # GOR007024379