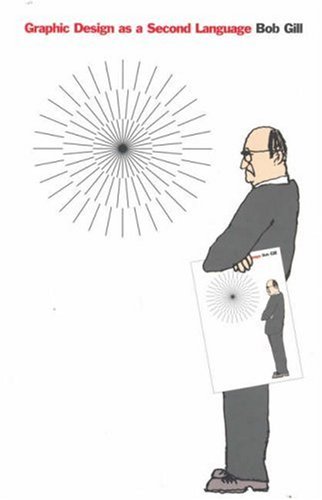 This publication is part of the Handson Graphics series - an exciting and unique collection exploring the work of respected and highly talented international designers. The books in this series are primarily aimed at students and teachers of design. However they also provide an invaluable resource for all those interested in grahic design. The content is international, collectable and accessible to all. Bob Gill's Graphic Design as a Second Language is a practical and palatable educational resource, aimed at students of graphic design. It provides a comprehensive package of the fundamentals of design, offering an important insight into how to develop original work.

Bob Gill is a designer, an illustrator, a copywriter, a film-maker and a teacher. After freelancing in New York, he went to London on a whim in 1960 and stayed for fifteen years. He started Fletcher/Forbes/Gill, a design office with the two brightest designers in England. F/F/G began with two assistants and a secretary. Today, it's called Pentagram, with offices everywhere except Tibet. Gill returned to New York in 1975 to write and design Beatlemania. Gill still works independently and still teaches. He's had one-man shows in Europe, South America, the Far East and in the US. He was elected to the New York Art Directors Club Hall of Fame and the Designers and Art Directors Association of London recently presented him with their Lifetime Achievement Award. This is his sixth book about design and illustration.