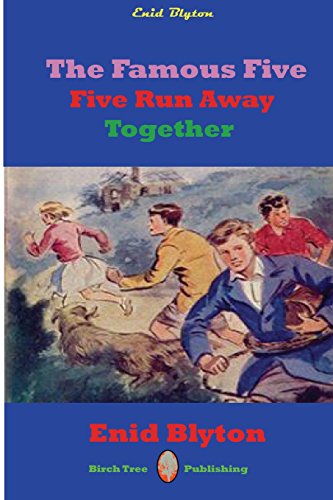 Enid Blyton’s The Famous Five, Five Run Away Together, is Enid Blyton’s most beloved series. Julian, Dick, Anne, George and Timmy the dog are on another adventure. George is wondering who has been on his island, and what is locked in a hidden trunk on Kirrin Island? The Famous Five is on the trail of smugglers coupled with a chilling scream in the air. This story remains fresh and exciting as these young kids stumble over secret maps, spies and suspense.

Enid Blyton, who died in 1968, is one of the most popular and children’s authors of all time. She wrote over 700 books, which have been translated into many languages throughout the world. She also found time to write numerous songs, poems, and plays, and ran magazines and clubs.

Despite stiff competition from Five go to Smuggler's Top, this one has always been my favourite -- Alison Flood * theguardian.com *

1. Five Run Away Together

Book Description Birch Tree Publishing. Paperback. Condition: Good. A copy that has been read, but remains in clean condition. All pages are intact, and the cover is intact. The spine may show signs of wear. Pages can include limited notes and highlighting, and the copy can include previous owner inscriptions. At ThriftBooks, our motto is: Read More, Spend Less. Seller Inventory # G1927558395I3N00

Book Description Birch Tree Publishing, 2013. Condition: Good. Shows some signs of wear, and may have some markings on the inside. Seller Inventory # GRP106734994

Book Description Birch Tree Publishing, 2013. Condition: Good. A+ Customer service! Satisfaction Guaranteed! Book is in Used-Good condition. Pages and cover are clean and intact. Used items may not include supplementary materials such as CDs or access codes. May show signs of minor shelf wear and contain limited notes and highlighting. Seller Inventory # 1927558395-2-4