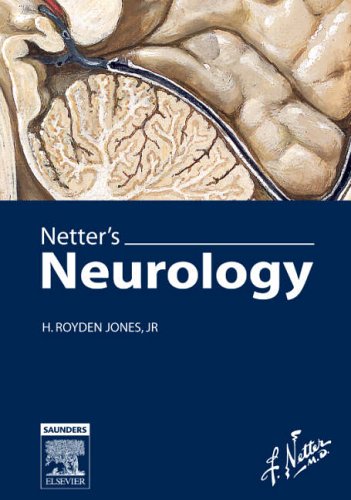 Netter's Neurology provides the best of an atlas, an anthology of clinical cases, & an important basic introduction to requisite information needed to diagnose & initiate treatment of various neurologic and neuromuscular disorders. Case vignettes from the Lahey Clinic set the stage for discussion of the basics of specific neurologic disorders, including history, epidemiology, clinical presentation, differential diagnosis, testing modalities, therapy, & prognosis. To help readers more easily and clearly conceptualize this complicated body system, more than 350 classic Netter and Netter-style illustrations are included and supplemented by modern neuroimaging, or photomicrography, further defining the anatomy of the specific areas of dysfunction.

Dr. H. Royden Jones was Chair of the Department of Neurology at Lahey Hospital and Medical Center, Burlington, Massachusetts; Director of the Electromyography Laboratory at Boston Children’s Hospital; and Clinical Professor of Neurology at Harvard Medical School. Dr. Jones completed residencies in Internal Medicine and Neurology and a fellowship in neurological physiology at the Mayo Clinic. He served over 3 years in the United States Army as Chief of Neurology at 5th General Hospital, Bad Cannstatt, Germany. Dr. Jones was Board certified in neurology, clinical neurophysiology, and neuromuscular medicine. Upon completion of his training he joined the Lahey Clinic in 1972. In 1977 he also joined the neurology department at Boston Children’s Hospital, founding the electromyography laboratory in 1979. Pediatric EMG became his major clinical research interest. Dr. Jones was co-editor of three major textbooks on childhood clinical neurophysiology and neuromuscular disorders. He was a co-founder of the biennial International Paediatric EMG Conference based at Great Ormond Street Children’s Hospital, London, England. Recognized as one of the top neurologists in the U.S., Dr. Jones was an author and editor of several Netter publications including two editions of Netter’s Neurology, The Netter Collection of Medical Illustrations: Nervous System, Volume 7, Part I (Brain) and Part II (Spinal Cord and Peripheral Motor and Sensory Systems), 2nd Editions (volumes in the Netter Green Book Collection). Dr. Jones authored and edited several other Netter publications and contributed over 200 peer-reviewed papers and book chapters. Dr. Jones served 8 years as a director of the American Board of Psychiatry and Neurology, becoming Chair of its Neurology Council in 2004. In 2007 he received the Distinguished Physician Award from the American Association of Neuromuscular and Electrodiagnostic Medicine. Lahey Clinic’s Medical Staff Association recognized Dr. Jones in 2010 with its highest honor-the Frank Lahey Award for “commitment to the values of Dr. Frank Lahey: respect, teamwork, excellence, commitment to personal best. Dr. Jones was named Outstanding Teacher in Pediatric Neurology 2012 - 2013 by the Department of Neurology, Boston Children’s Hospital, Harvard Medical School. He also received an award in recognition of his many years of dedicated teaching at Tufts University School of Medicine.

"The text is sufficiently broad as to retain its relevance for practicing general physicians, while written with sufficient clarity as to attract students with little knowledge of the subject."
-Muscle & Nerve Sept 2005