Items related to From Terror to Freedom: A Warning about America's...

From Terror to Freedom: A Warning about America's Affair with Islam 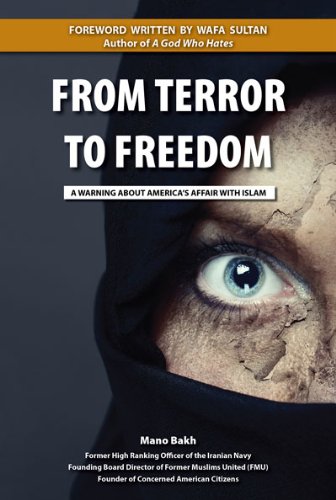 With a Foreword by Dr. Wafa Sultan, this memoir describes the tortuous escape of a prominent member of the Iranian Navy during the takeover of Iran by Islamic radicals. Admiral Bakh miraculously escaped certain death. Bakh graphically delineates the totalitarian rise of the Islamic Republic, the slaughter of innocents, and the flight of Iran's best and brightest, while demonstrating his immense love for the people of Iran, its history and culture. A hunted man, he writes under an assumed name. A fascinating account that keeps the reader engaged. Major endorsements: Robert Spencer, Dr. Tawfik Hamid, and Jerry Gordon with others.

PRAISE FOR FROM TERROR TO FREEDOM Few Americans have experienced the parallel universe of the anarchy, complete social disruption, and needless slaughter by a newly formed militia that bowed to the lies and propaganda used by Ayatollah Ruhollah Khomeine when he returned to power in Teheran in February of 1979.Khomeine's iron fisted rule marked the end of freedom for the Iranian people as they became subjects of Islamic theocratic tyranny. Part of Khomeine's plan to insure that he remain leader, was the brutal summary execution of Iran's military officers and high-ranking enlisted personal.To return a country, a former alley to the United States, to a seventh century theocracy, those with leadership ability, professors at the university and the educated were also needlessly slaughtered.Then President, Jimmy Carter, was directly responsible for this tragedy.This is the story of the harrowing ordeal of Mano Bakh, his wife, and two small children as they overcame unimaginable roadblocks and continuous encounters with the militants ruling the country. Bakh would not be stopped.For every punch thrown he followed with exactly the right counter punch as he led his family to the freedom he eventually found in the U.S.A.This is a story of love, compassion, family, joy, horror, and persistence demonstrated by the author as he still ponders the words, Could it be, that after so many years, hate and revenge live on in the minds of those who believe in Mohammed's chilling words, “convert or die” ? A must read for those desiring a first hand detailed understanding and what transpired during the brutal transition to what is now referred to as the Iranian Revolution.—JIM CAMPBELL, Staff writer, National Examiner One of the greatest books I've read in the field of Radical Islam. It exposes the reality and the threats of the Islamic regime in Iran in a wonderful and captivating manner. The author's personal story in this book is a must-read. I salute the author for writing his invaluable experience with the Islamic revolution of Iran.—DR. TAWFIK HAMID, Senior Fellow and Chair for the Study of Islamic Radicalism at the Potomac Institute for Policy Studies.From Terror to Freedom by Mano Bakh, a former Commodore in the Imperial Iranian Navy, is a gripping chronicle about the turmoil of the Islamic revolution and his escape with his family to freedom in America. Bakh graphically delineates the totalitarian rise of the Islamic Republic, the slaughter of the innocents and the flight of country's best and brightest. Bakh, the scion of a loving middle class Persian family has the luck to pass exams and learn secular values of the West while a cadet at the Italian Naval Academy in Livorno, Italy. In Italy he experiences an epiphany—discovery of the hate at the core of doctrinal Qur'anic Islam as a result of an academic assignment. His graduate educational accomplishments at the prestigious US Naval Post Graduate School and later development of a training command for the Imperial Iranian Navy are stifled when he is deprived of ceremony to Admiral when the Islamic Revolution takes place in February, 1979. From Terror to Freedom is a reality check on how a modernizing Iran was brutally overthrown by the Ayatollahs, Mullahs, and militants, and among them, President Ahmadinejad. Bakh's dramatic escape to America is facilitated with the aid of a network that includes the valiant Sheik Abdullah, the mayor of Kharg Island, Iranian ex-pats in London, and US Navy contacts. Every member of the 112th Congress should receive a copy of From Terror to Freedom and heed Bakh's cautionary tale that a 'reformed' Islam embraces the barbarism of totalitarian Jihad.—JERRY GORDON, Senior Editor New English Review

Mano Bakh was a high ranking officer of Iran's Imperial Navy during the Iranian Islamic Revolution. He miraculously escaped with his life. (Several who helped him escape were executed.) Bakh was born a Muslim, but became disenchanted with the religion when he discovered its mission was to kill or convert all who did not believe in the teachings of the Koran.


Mr. Bakh is the Founder and Director of Concerned American Citizens (ConcernedAmericanCitizens.org), a non-profit devoted to the debate about the ingress of radical Islam in the West. He is also a Founding Board Director of Former Muslims United (FMU). His main goal is to educate the average citizen about the dangers of Shariah Law. He is a regular contributor to TV, radio, and print media on topics pertaining to Radical Islam, Shariah Law, and the protection of our American Constitution.

1. From Terror to Freedom: A Warning about America's Affair with Islam