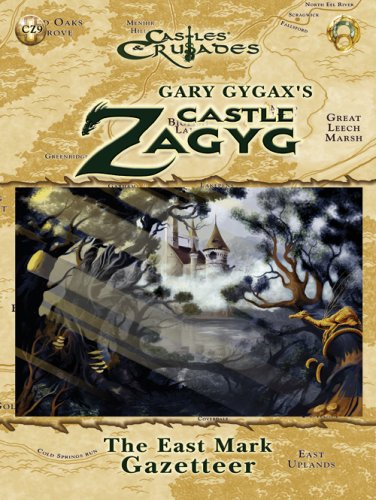 Gary Gygax s Castle Zagyg: The East Mark Gazetteer Folio Edition is a 9" x 12" pocket folder containing the 24-page Gazetteer of the East Mark, the 48-page adventure module Mouths of Madness (for 3 - 6 player character of levels 1st - 3rd) with 3 accompanying maps. The Gazetteer Compiled by the Sages Guild of Yggsburgh, this catalogue covers the climate, culture, geography, and history of the East Mark, a region of some 1,500 square miles. Also, learn of the deities worshiped, the zodiacal astrology of its people, its lunar calendar, and much more! Extracted from Castle Zagyg Yggsburgh, the Gazetteer offers you a quick reference guide for the East Mark wherein lies the fabled Castle Zagyg and the sprawling suburbs of Yggsburgh. Mouths of Madness Adventure The cursed fog that has long enshrouded Castle Zagyg at last dissipates! In days of yore Castle Zagyg was a place synonymous with adventure, mystery, and intrigue. Many sought to plumb its untold depths, to explore its fabled dungeons and realms unseen. Some seekers returned with vast treasure and impossible tales, others vanished with hardly a trace. At length a fog came to the Eastmark s most nefarious landmark, swallowing the legendary castle and rendering its many and sundry dungeons unattainable. Even the most potent of spellbinders failed to penetrate the dread fog. Years passed and the lair of the Mad Archmage was shunned. But now, as inexplicably as it arrived, the fog dissipates in nearly imperceptible degrees. At the base of the bluff on which the castle ruins lie, yawning caves materialize from the gloom. Do these so-called Mouths of Madness provide ingress to the fabled dungeons below Castle Zagyg? Many seekers would know . . . . The call for adventure issues anew! The Little Hillwood lies a day s ride north of the Free Town of Yggsburgh, a rolling woodland attendant with bandits, goblins, howling ape-men, and other fell folk. These malign beings have rallied in the deeps of Castle Zagyg's surrounding wilderness, no doubt attracted by the vortex of madness inspired by the Mad Archmage. There is but one-way to cross these hoary wilds fraught with peril: one must traverse the Old Castle Track. At path s conclusion lie the fabled ruins engulfed by an eldritch fog, yet the caves below beckon, where bugbear, goblin, gnoll, and orc dwell -- and not a few monstrous inhabitants as well -- such as a prowling werewolf, a sly hill giant, a deranged owlbear, bizarre fungi, and deadly blobs that drink flesh from bone! Will your party be among the first to explore this first glimpse of the newly revealed Castle Zagyg? This is a special, modified version of the first adventure included in the forthcoming-boxed set, Castle Zagyg Volume II, The Upperworks, soon to be published by Troll Lord Games