Items related to Morals and Dogma of the Ancient and Accepted Scottish... 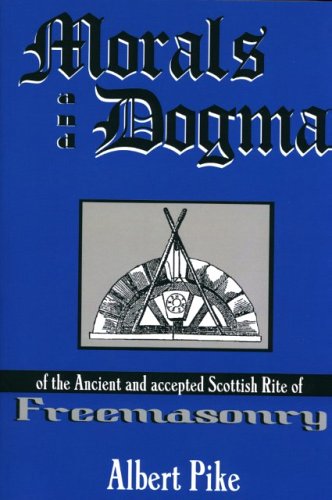 This historic book may have numerous typos, missing text or index. Purchasers can download a free scanned copy of the original book (without typos) from the publisher. 1871. Not illustrated. Excerpt: ... which Masonry is ordained of God to bestow on its votaries: not sectarianism and religious dogma; not a rudirnental morality, that may be found in the writings of Confucius, Zoroaster, Seneca, and the Rabbis, in the Proverbs and Ecclesiastes; not a little and cheap common-school knowledge; but manhood and science and philosophy. Not that Philosophy or Science is in opposition to Religion. For Philosophy is but that knowledge of God and the Soul, which is derived from observation of the manifested action of God and the Soul, and from a wise analogy. It is the intellectual guide which the religious sentiment needs. The true religious philosophy of an imperfect being, is not a system of creed, but, as Socrates thought, an infinite search or approximation. Philosophy is that intellectual and moral progress, which the religious sentiment inspires and ennobles. As to Science, it could not walk alone, while religion was stationary. It consists of those matured inferences from experience which all other experience confirms. It realizes and unites all that was truly valuable in both the old schemes of mediation,--one heroic, or the system of action and effort; and the mystical theory of spiritual, contemplative communion. "Listen to me," says Galen, " as to the voice of the Eleusinian Hierophant, and believe that the study of Nature is a mystery no less important than theirs, nor less adapted to display the wisdom and power of the Great Creator. Their lessons and demonstrations were obscure, but ours are clear and unmistakable." We deem that to be the best knowledge we can obtain of the Soul of another man, which is furnished by his actions and his life-long conduct. Evidence to the contrary, supplied by what another man informs us that this Soul has said to his, would w...

Kessinger Publishing reprints over 1,500 similar titles all available through Amazon.com.

"Albert Pike (December 29, 1809-April 2, 1891) was an attorney, soldier, writer, and Freemason. Pike is the only Confederate military officer or figure to be honored with a statue in Washington, D.C. The statue sits in Judiciary Square.

Pike was born in Boston, son of Ben and Sarah (Andrews) Pike, and spent his childhood in Byfield and Newburyport, Massachusetts. He attended school in Newburyport and Framingham until he was fifteen, at which point, having passed the Harvard entrance exam but unable to afford tuition, he began a program of self-education, later becoming a schoolteacher in Gloucester, Fairhaven and Newburyport.

In 1831 Pike left Massachusetts to travel west, first stopping in St. Louis and later moving on to Independence, Missouri. In Independence, he joined an expedition to Taos, New Mexico, hunting and trading. During the excursion his horse broke and ran, forcing Pike to walk the remaining 500 miles to Taos. After this he joined a trapping expedition to the Llano Estacado in New Mexico and Texas. Trapping was minimal, and after traveling about 1300 miles (650 on foot), he finally arrived at Fort Smith, Arkansas.

Settling in Arkansas in 1833, he taught school and wrote a series of articles for the Little Rock Arkansas Advocate under the pen name of "Casca." The articles were popular enough that he was asked to join the staff of the newspaper. Later, after marrying Mary Ann Hamilton, he purchased part of the newspaper with the dowry. By 1835 he was the Advocate's sole owner. Under Pike's administration the Advocate promoted the viewpoint of the Whig party in a politically volatile and divided Arkansas.

He then began to study law, and was admitted to the bar in 1837, selling the Advocate the same year. He was the first reporter for the Arkansas supreme court, and also wrote a book (published anonymously), titled The Arkansas Form Book, which was a guidebook for lawyers." (Quote from wikipedia.org)