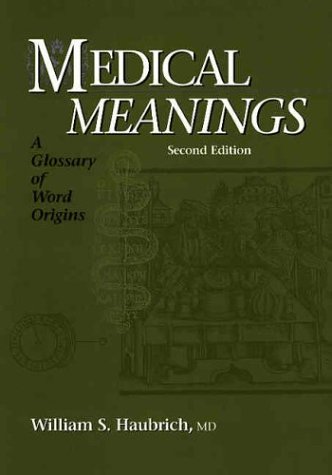 More than just a dictionary, Medical Meanings explores the history of medical terms. Written with bracing wit and a refreshing lack of pretense, this new edition has been completely revised and sharpened, and nearly 300 new words and phrases have been added. Whether you are a student, physician, or word connoisseur, a delightful reading experience awaits.

Understanding medical terminology can be a challenge. There are several excellent comprehensive medical dictionaries available, but they provide only brief information about the origins of the words that they define. Serious students of language will want more depth. This title is a delightful supplement to the traditional dictionary of medical terms. It is a revision of Haubrich's Medical Meanings, published by Harcourt in 1984, which was itself an update of Henry Alan Skinner's Origin of Medical Terms (Williams & Wilkins, 1961).

The book has approximately 3,000 entries arranged in two columns per page. Arrangement is alphabetical with a few exceptions: broad categories such as colors, numbers, and phobias are grouped together under one heading. The entry headings are in boldface, and words within the entry in languages other than modern English are in italics. Greek terms are transliterated. Neither syllabication nor pronunciation is provided. The introduction contains instructions for using the book, a Greek transliteration table, and an invitation to send suggestions for improving the work to the author.

The entries are short etymological essays tracing the history of the word and offering witty comments. Hysterectomy, literally "cutting the uterus," leads to a discussion of Plato's belief that the uterus was an animal roaming freely within the female body and causing moodiness. The author states, "a safe assumption is that this notion was proclaimed and promoted, in the main, by men. From this anatomic designation comes the term hysteria, a term doubtless conceived by a confirmed male chauvinist."

Changes from the 1984 edition include some added terms and some revision to existing entries. Among the new terms are APACHE (an acronym for a means of evaluating critically ill patients), kuru, and REM. Ascorbic acid and masochism are among the entries that have been revised. A few entries, such as Saint Vitus Dance, have been dropped.

Although this is a small volume--the twenty-eighth edition of Dorland's Illustrated Medical Dictionary (Saunders, 1994) has 115,000 entries--it makes a unique contribution to medical reference by focusing on history and etymology rather than clinical usage. Students of linguistics will find it as useful as students of the health sciences. Those who want more than a definition will find the book enjoyable and entertaining. It is an excellent companion to traditional dictionaries. Since this is one type of medical book in which currency is not critical, libraries owning the 1984 edition may elect not to update unless the title is heavily used.

Originally published in 1984, this etymology of over 2000 medical terms has been heavily revised for its first edition with a new publisher. Each entry consists of a 50- to 100-word description, usually tracing the term to its old English, Latin, or Greek root. Dates are rarely given for the etymologies, so the reader does not know when or where the term was actually coined. Since definitions of the terms are not included, a general reader may need to use this book in conjunction with a standard medical source such as Stedman's Medical Dictionary (Williams & Wilkins, 1995. 26th ed.). Written by a physician fascinated with words rather than by a lexicographer, this book is very interesting but not vital to any collection; Henry Skinner's Origin of Medical Terms (1961. o.p.) is still a better source.?Eric D. Albright, Galter Health Sciences Lib., Northwestern Univ., Chicago
Copyright 1997 Reed Business Information, Inc.

Book Description Hardcover. Condition: New. 2nd. Hardcover. Dr. William S. Haubrich's curiosity knows no bounds, nor does that of his readers. The overwhelming demand for more histories of yet more words is satisfied in the eagerly awaited second e.Shipping may be from multiple locations in the US or from the UK, depending on stock availability. 267 pages. 0.798. Seller Inventory # 9781930513495