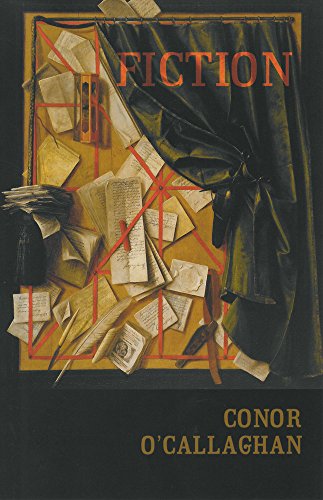 Fiction uses the metanarrative of writing for its overarching theme, as it tests a web of reality and imagination, truth and deceit. From the title poem’s first line, None of this is true,” to the poem This,” late in the volume, we are aware that writing begins with a pencil,” with the physical act of writing, while searching for an original voice, and ends haunted by the mimicry involved in perfecting the craft (in darkness . . . littered with mockingbirds”). O’Callaghan highlights the self-referential process of creativity with great skill, and assures us of his maturation as a poet, one who is not only among the best of his generation, but increasingly among the best living. It is not surprising, then, that the art of poetry is central to Fiction. Art is not his only domain, however; there are also love poems, travelogues, poems to his children, on his time in the United States, on the growth of the self, philosophical meditations, political and historical essays where truth and fiction contest. This volume is fraught with the frisson of its own creation, as one would expect from a poet coming fully into his extraordinary powers, and keenly aware of the role voice and writing play in human consciousness.

Born in 1968 in Newry in Northern Ireland, Conor O’Callaghan grew up in Dundalk, a town just south of the Irish border. He served as Writer-in-Residence at University College, Dublin, taught at Wake Forest University for four years, and co-held the Heimbold Chair in Irish Studies at Villanova University. Currently, he teaches at Sheffield Hallam University in England, where he teaches courses in creative writing, modern poetry, and Anglo-Irish literature. He presently lives in England, but has spent time traveling around England, Ireland, the United States, and Italy. WFU Press has published Seatown and Earlier Poems (2000); Fiction (2005), which was shortlisted for the Irish Times Poetry Now Award; and most recently The Sun King (2013). His earliest books include The History of Rain (1993) and Seatown (1999), both published in Ireland by The Gallery Press. He is also the editor of The Wake Forest Book of Irish Poetry, Volume III. O’Callaghan is the recipient of a number of awards, including the Patrick Kavanagh Award for his first collection of poetry, the Rooney Prize Special Award, and the Times Educational Fellowship. He was shortlisted for the Forward Prize in 1994. In addition to poetry, Conor O’Callaghan’s interests extend to writing on sport, especially soccer and cricket. In 1996, Irish national radio aired O’Callaghan’s acclaimed radio documentary on cricket in Ireland, The Season. His prose memoir entitled Red Mist: Roy Keane and the Football Civil War deals with the public uproar surrounding Ireland’s involvement in the 2002 World Cup and made the bestseller lists in Ireland and the UK.

The Irish poet Conor O'Callaghan ought to have more of a reputation here: few American poets his age (he is thirty-eight) bring to the cozy matter of domesticity so much vigor and readiness. ...The house-of-mirrors deceits and self-deceits of estranged lovers here receive full, impressive representation. ... --Poetry