Items related to The Method of Grace

Max McLean The Method of Grace

The Method of Grace 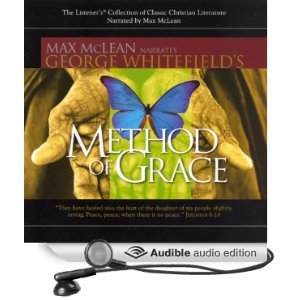 George Whitefield is considered the greatest evangelist of the 18th century and was a major contributor to the Great Awakening in Colonial America. Born in 1714 of humble origins, he grew up to become a very popular preacher. Churches were packed, bubbling over with eager anticipation to hear him. His preaching was described as apostolic, bold, purely gospel, with an immensity of pathos. His voice was so powerful that 30,000 people could hear him at once, and yet, so musical and well toned that some have said, he could raise tears by his pronunciation of the word Mesopotamia. In this sermon, The Method of Grace, Whitefield shows the way for a person to receive true, lasting peace in his soul.

GEORGE WHITEFIELD (1714–1779) was born in Gloucester, England. He attended Pembroke College at Oxford, where he was a member of the Holy Club with Charles and John Wesley. The group was highly disciplined and “methodical” in their performance of religion. In 1735, he read Henry Scougal’s The Life of God and the Soul of Man and had a spiritual new birth. Ordained in 1736, he started preaching and became very popular immediately. He crossed the Atlantic Ocean many times and preached in churches and open fields. Gifted with a prodigious voice and untiring energy he preached to huge crowds with great consequence.

1. The Method of Grace