Items related to Your Mother Should Know

Gaye, Enola Your Mother Should Know

Your Mother Should Know 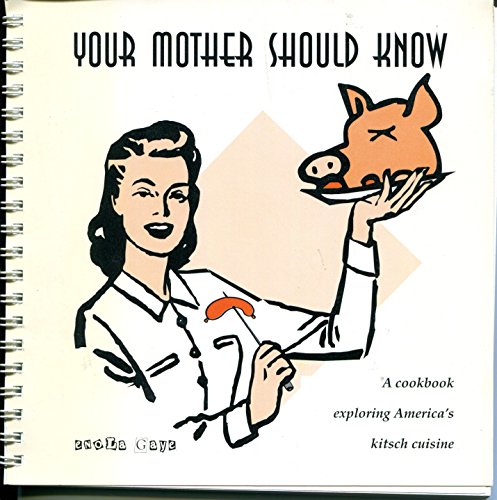 The cookbook that puts the kitsch in kitchen.

Born in 1842, Enola Gaye has influenced absolutlely no one in over one hundred and fifty years, as people will never listen to good advice.

Born to the usual two parents who separated as soon as it seemed appropriate to do so, he grew up in the care of his Mother, Grandmother, a Television set and the Public Schools. Miraculouly, he escaped the negative influences of the latter two and actually learned to enjoy reading from an early age. By the time he was six he had read the entire Dick and Jane series and wrote his first major essay "Dick and Jane and Modernist Revisionism In Cold-War America" which was so succesful it bored even his teachers. By seven he was tackling War and Peace. His dissertation "War and Peace and Modernist Revisionism In Cold-War America" increased his reputation as a mighty Windbag for his generation.

Also from the Author:

Read Enola Gaye's wry and hilarious articles, including the column Ask Red Emma in Poop God, the socio-political satire zine he co-edits. Enola Gaye recently edited Tom Boyle's "Rapunzel meets Santa Claus in Hell", also available from Street Saint. At the age of nine he discovered Mad Magazine and began writing satire. His "Mad Magazine and and Modernist Revisionism In Cold-War America" caused a stir among his fellow students and a furor in his instructors who accused him of plagarising his own ideas.

Unfortunately illness in the form of puberty set in and he began to fancy himself a poet. His Ode to a Drying Sock and I Hate the Sun in Morn are two of his most succesful attempts and have been used as lyrics by several obscure Rock bands who see them as metaphors for their own pimply, angst-ridden existences. But it must be allowed that, in purely literary terms they suck.

Young adulthood began a period of decline for young Gaye. He took a number of odd jobs first as a Rice Inspector at the Uncle Ben's plant, then as a Security Guard at an automated twine factory These were followed by a series of jobs waiting tables at restaurants who's chief decor usually consisted of artificial ferns and brass railings. It was at one of these restaurants, the Cud 'N' Cow, that he accidently fell into the one occupation that was to ever earn him any money or respect. The chef had died choking on a caper, and as young Gaye was the only other homosexual in the place he was chosen to replace the expired cook. The management drug the dead man into the meat-cooler until the termination of the Dinner hour and gave young Gaye, then only 23, the chef's hat. Gaye cooked like he had never cooked before (and he never had cooked before) and although most of the customers became violently ill, he knew he had found a way to earn his bread. Henceforth he would bake bread to earn it.

Meanwhile he led a dissolute life going to coffee shops, studying photography and taking Heroin. Soon he began working in cafes making Lates and Vegetarian Lasagna for the new gentry. It was at one of these that he met the two life-long friends that were to change his life forever, for the next few years. Those two men were the inimitable Tomb and the ferocious Professor Theophobia. He joined forces with them in producing the legendary Zine "Poop God". He wrote hilarious and stinging satire such as "My Ass: Post-modernist Revisionism In Cold War America" and the witty yet coarse "Ask Red Emma" a lampoon of advice columnists. A sucessful career in Radio followed. In the 1930's and '40's almost no one wanted to miss the weekly antics of Tomb, the Professor and The Queer as Gaye's character was often called. For three hours every Thursday from 9 to noon sets all over America were tuned in when there was nothing else to do. Movie contracts and catering deals were offered in vain. The three had agreed not to "sell-out" because they feared losing their "Street Credibility". In this way they were years in advance of the DIY ethic later given expression in the Punk ethos. It was also very stupid of them a