Items related to We Are Holding the President Hostage: How the Mafia...

Adler, Warren We Are Holding the President Hostage: How the Mafia Fights Terrorism

We Are Holding the President Hostage: How the Mafia Fights Terrorism 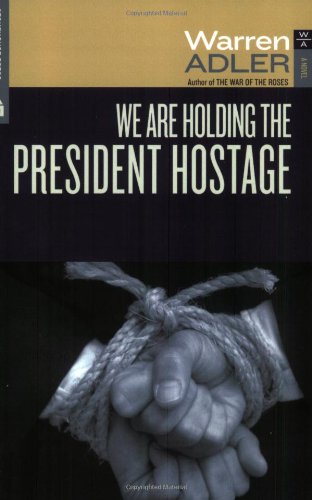 Aging Mafia Don Salvatore Padronelli is furious when fanatical Islamic terrorists capture his beloved daughter and grandson on a trip to Egypt. Fed up with ineffective diplomatic measures and a lack of governmental action, the Don and his loyal henchman cleverly insinuate themselves into the White House posing as waiters at a State dinner and take the President and his wife hostage. Now the Don calls the shots.

This classic confrontation between two men on utterly opposite sides of the law is laced with humor and illustrates how fierce paternal love can motivate even the most ruthless of gangsters into reckless acts of courage and bravery.

How The Godfather Influenced My Novel

I have long been a fan of Mario Puzo's The Godfather ever since we attended Don Wolfe's creative writing course in the New School years ago. Mario was more than ten years my senior, a World War II veteran, while I was a twenty-year-old college graduate who took Dr. Wolfe's freshman English course at NYU, inspiring me to devote my life to writing.

The class met once a week, but a few of us from the class were chosen by our classmate Harold Applebaum, who was a published poet that frequently appeared in The New York Times, to meet periodically in our homes to read our work and generally socialize. Mario and I were among some of the select few; we liked to think that Harold had chosen us because he deemed our work as reflecting superior talent. We were flattered of course, although in retrospect, many of the students in that class were extraordinarily talented. I think there were about six of us among Harold's chosen, all determined writers hoping to make our mark and who were all flattered by Harold's attention.

Years later when The Godfather was published, I was quick to purchase the book and gobbled it up with relish. I thought the book was wonderful. When it hit the silver screen its impact was extraordinary and spawned a giant career for my fellow classmate.

I can trace a direct line from The Godfather to my characters in We Are Holding the President Hostage. Another influence was the fact that I had grown up in Brownsville, Brooklyn, in the neighborhood that was the headquarters of Murder Inc. and had observed in person many of the gangsters who were part of that era.

Another influence of mine was the fact that I had become familiar with the White House and its inner workings, having been a consultant to the Nixon White House with a blue pass that gave me access. Although there was tight security in those days it was far more lenient than it is today.

It was also a time when hostage taking was just beginning to show its ugly face and the news was filled with incidents in which the taking of a hostage was becoming a political act of choice. For me, it was a question of connecting the dots. I was able to imagine a story where a group of mafia characters, one of whose daughters was taken hostage in Egypt, were able to infiltrate the White House with the express purpose of persuading the president to use mafia tactics to deal with the hostage taking.

The Godfather will always have a special place in my heart, being one of the major influences that sparked We Are Holding the President Hostage, including my political experience and the events going on around me during the 1980s. But it really comes down to my relationship with Harold and Mario. If I had never known them, then perhaps the course of events wouldn't have played out the way they did and the idea for my book never would have materialized.

Warren Adler’s twenty-five published novels have won popular and critical success all over the world, and they have been translated into more than thirty languages. Two of his books were made into major motion pictures, the classic “The War of the Roses” with Michael Douglas and “Random Hearts” with Harrison Ford. Three of his acclaimed short stories were adapted as a three-hour trilogy on PBS's American Playhouse titled, “The Sunset Gang.” Mr. Adler’s themes deal primarily with intimate human relationships – the mysterious nature of love and attraction, the fragile relationships between husbands and wives and parents and children, and the corrupting power of money. Readers and reviewers have cited his books for their insight and wisdom in presenting and deciphering the complexities of contemporary life. Warren Adler is arguably the only author in the world, published by major publishing houses, who has reacquired the English language and foreign rights to his entire backlist of 25 novels and set up a publishing company, Stonehouse Press, designed to distribute his backlist worldwide in all formats.