Items related to Ibid: A Life 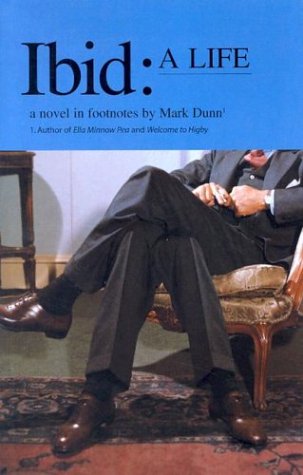 Tells the story of Jonathan Blashette, a three-legged circus performer and the CEO of Dandy-de-odor-o Inc., in a novel composed entirely of footnotes.

Mark Dunn's early forays into the novel, Ella Minnow Pea and Welcome to Higby, were praised by critics and relished by bibliophiles for their linguistic gamesmanship. But Ibid: A Life easily outdoes its predecessors for literary audacity. The novel purports to be not a novel at all, but the endnotes of a biography. The main text of the supposed life of Jonathan Bashette was destroyed by a careless editor, and, as the wearied author reports in the letters which begin the book, his publisher has decided that the notes can stand alone.

At first, the conceit makes for difficult reading, but Dunn does a remarkable job of slowly revealing three-legged Jonathan Blashette and his odd world without ever departing from the footnote form. Readers learn that Blashette, born in Pettiville, Arkansas, in 1888, was doomed by his extra leg to become a sideshow attraction. But the boy escapes the circus to become a soldier in World War I. There, in the trenches, he first glimpses (or smells) his future calling: male underarm deodorants. Upon his return to the States, he launches the Dandy-de-odor-o Corporation and marries several times (each wife meeting a bizarre end in the cursed city of Boston). Though rocked by adversity, the fictional Blashette lives a rich life full of encounters with the writers, politicians, artists, and celebrities that marked the 20th Century.

Rather than being a limitation in this quirky Horatio Alger story, the notes offer Dunn freedom to explore the diversity of his imagination with brief sketches and "back-story" that are, in fact, all the story there is. The novel becomes a pastiche of parodies of famous documents, speeches, and poems. Dunn includes the "full text" of Lou Gehrig's farewell speech at Yankee Stadium (which includes thanks for a "'Waldorf' Wardrobe Trunk with vulcanized fiber binding and built-in shoe pockets!") and an alternate version of the Alcoholics Anonymous 12 steps, complete with consideration of Dolores Del Rio as a "power greater than ourselves." Throughout, Dunn references one obscure fictional book after another, from Ringleader: A Life in Circus Management, with a Foreword by the Bastard Ringling Brother "Skippy" to a collection of letters sent to a urologist, Confessions to a Pee Pee Doctor.

Ibid's humor, an odd mix of Monty Pythonesque potty jokes and highbrow political and literary satire, may not be for everyone. But Dunn's deft contortion of the usual elements of storytelling into this odd formal experiment proves to be a perfect showcase for his unique wit and intellect. Ibid may not be the Great American Novel, but it is certainly the cleverest American endnotes ever to see print. --Patrick O'Kelley