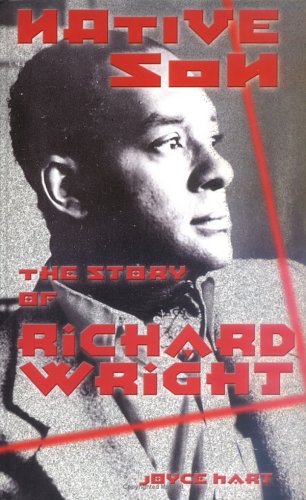 Traces the life and achievements of the twentieth-century African American novelist, whose early life was shaped by a strict grandmother who had been a slave, an illiterate father, and a mother educated as a schoolteacher.

Gr. 6-10. Two biographies in the World Writers series introduce these landmark authors' lives and works in relation to black history and culture. Hart quotes Wright directly about his desire to reveal the true story of the lives of black people and to get rid of the myth of the "happy comical Negro." She discusses the controversy he created, among whites and blacks, with his angry view of racist oppression and his raw writing style. She's honest about his failures as well as his extraordinary success as the first best-selling black writer in America. The writing style in the Brooks biography is sometimes dull, with too much plodding chronological detail. But Rhynes does a fine job of showing how Brooks' views changed, from her early support for peaceful social integration to her later militant focus on racial pride. This is also a stimulating introduction to the poet's literary themes and content. Both biographies include occasional photos, a time line, a bibliography, and Web sites, as well as chapter source notes for direct quotes. Hazel Rochman
Copyright © American Library Association. All rights reserved

Grade 8 Up-A full portrait of one of the seminal African-American writers of the 20th century. Hart follows her subject from his poor Southern childhood to his struggles as a young man in Chicago to his literary success and notoriety and the end of his life in Europe. Wright's best-known works-at least to high school students-are Native Son and Black Boy, both of which are major reference points and sources for the text. The author also explores Wright's involvement in the Communist Party, which at one point facilitated his writing but would turn out to haunt his achievements; his love life; and his influence on such artists as James Baldwin and on cultural institutions like Broadway theater and the Paris Review. Occasional black-and-white photographs highlight people and places of import to his story, as does a standard time line. The writing is accessible and flows smoothly. While Robin Westen's biography (Enslow, 2002) is hard to beat, this one is a worthwhile addition.
Andrew Medlar, Chicago Public Library, IL
Copyright 2003 Reed Business Information, Inc.