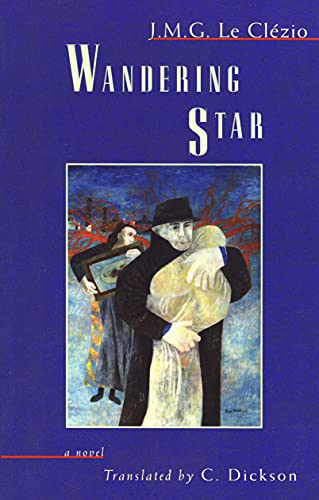 “This is Nobel-quality writing, an international author with a mature style telling a story to the peak of his capacity. The English language needs more of it.” —The Telegraph

From the winner of the 2008 Nobel Prize for Literature, Wandering Star is the story of two young women, one uprooted by the Holocaust and the other by the founding of the state of Israel.  Bearing witness to the boundless strength of the spirit, and based on his own experience as a child in World War II, J.M.G. Le Clézio chronicles the saga of a young girl, Esther, who, in a small mountain village north of Nice occupied by Italian forces, learns what it means to be Jewish in wartime Europe. A quiet young teenager, she suffers the loss of her beloved father and, with her mother, is forced to flee advancing German troops.
At war’s end, Esther and her mother make an arduous journey to Jerusalem, where their path crosses with a group of displaced refugees, including Nejma, a Palestinian girl whose story of life in the camps balances Esther’s own tale of suffering and survival. Esther and Nejma never meet again, but in their respective exiles, they are forever haunted by the memory of one another. Wandering Star is a powerful coming-of-age story and, as Le Figaro notes, truly “a luminous lesson in humanity.”

J.M.G. Le Clézio is a distinguished French author with over 30 novels, essays, and story collections to his credit. Since the 1990s, Le Clézio and his wife have shared their time between Albuquerque, New Mexico, the island of Mauritius, and Nice, France. He is the winner of the 2008 Nobel Prize in Literature.

Internationally acclaimed French novelist Le Clezio is a bewitching storyteller with a penchant for tales of survival that are at once acutely realistic and mythically romantic. In his latest hauntingly lyrical yet clear-eyed and worldly novel, he tells the story of two young women uprooted by the Holocaust and the establishment of the state of Israel. Esther and her parents are hiding from the Germans in a mountain village where the children run wild and grow strong while the adults risk their lives in the Resistance movement. Esther survives and, after much suffering, embarks on an arduous journey to Jerusalem. But as she and her fellow exhausted travelers finally near their promised land, they pass a stream of equally despairing, newly displaced refugees, among them Nejma, a Palestinian girl. Nejma then chronicles the misery of a gravely ill-provisioned camp and her heroic escape. Exquisitely attuned to nature's quest for balance and humanity's penchant for excess and paradox, Le Clezio writes with high compassion and deep wonder of the boundless strength of the spirit. Donna Seaman
Copyright © American Library Association. All rights reserved

Book Description Paperback. Condition: New. Paperback. "This is Nobel-quality writing, an international author with a mature style telling a story to the peak of his capacity. The English language needs more of it."?The Telegra.Shipping may be from multiple locations in the US or from the UK, depending on stock availability. 328 pages. 0.417. Seller Inventory # 9781931896566