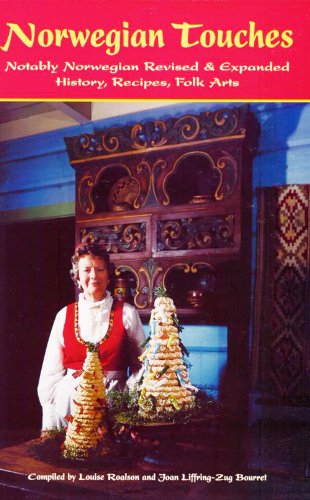 They came by boat, some in 1825 in the smallest vessel ever to cross the Atlantic at the time. They came for a new life, a better future. They brought arts, culture, and foods the lies of which American had never seen before. "Norwegian Touches" tells the stories of Norwegian immigrants, their ancestors, and their descendants. It also includes tales of great Norwegians such as playwright Henrik Ibsen, artist Edvard Munch, composer Edvard Grieg, violinist Ole Bull, sculpture Jacob Fjelde, master novelist Ole Edvart Rolvaag, and Wisconsin woodcarvers Else Bigton and Philip Odden. Featureed tourist attractions include Vesterheim Norwegian-American Museum in Decorah, Iowa; The Chapel in the Hills, Rapid City, South Dakota; Moorhead, Minnesota's Heritage Hjemkomst Center; and Mount Horeb, Wisconsin, which bills itself as the troll capital of America. The book is beautifully designed and is illustrated with about 80 photographs, half of them in full color. About 100 classic recipes cover a range of Norwegian foods.

Louise Roalson?s family by marriage traces back to the Norwegian Island of Byre. Roalson ancestors, Iowa Norwegian pioneers, descended from Viking-age kings and queens of Norway. Roalson is a former writer for The Cedar Rapids Gazette and a freelancer to The Iowan magazine.

As Penfield publisher, Joan Liffring-Zug Bourret has published more than 100 books in 25 years. This photographer and writer is of Norwegian descent.