Items related to The Art of the Possible!: Comics Mainly Without Pictures

Koch, Kenneth The Art of the Possible!: Comics Mainly Without Pictures

The Art of the Possible!: Comics Mainly Without Pictures 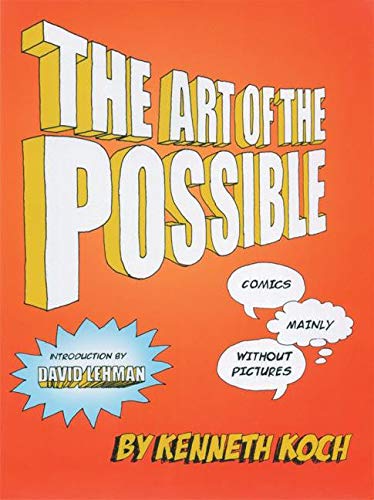 The Art of the Possible: Comics Mostly without Pictures is infused with the same energetic wordplay, humor, and tenderness as the best of Koch's poems, and illustrated and lettered in his own hand, studded with visual puns and jokes, peopled with recognizable characters from the worlds of arts and letters. Recurring themes and serial comics include: the Brer Comics, starring Brer Fox and his love interest Ella; the Virgil Thompson comics, set in the Chelsea Hotel and featuring Aaron Copland, John Cage, Lillian Hellman, Twiggy, Miles Davis, and other fab figures of the milieu; the Autobiography Comics, which tell of the birth of Koch's daughter Angela; the Artist in his Studio Comics; and the Dead White Man Comics. In the final comic in collection, "Global Charming," Koch writes: "A phenomenon is isolated called 'Global Charming.' Here's what it means: Life on earth becomes more and more delightful," and The Art of the Possible is our best evidence of that assertion. Part journal, part sketchbook, and wholly original, here is a window into the life and art of one of America's most treasured poets and teachers.

In 1992, Kenneth decided that not only could he borrow subject matter or adapt a narrative technique from comics but it might be possible to write poetry in a new form based on them. The Art of the Possible is the fruit of that decision. It is as high-spirited as Koch’s fans would expect and extraordinarily inventive in treating the comic strip as a conceptual form 'mainly without pictures.' Koch’s comics can work like the Calligrammes of Apollinaire (consider 'Bosom Comics') or like a box chart ('Different Kinds of Guys'). As happened earlier when he wrote One Thousand Avant-Garde Plays, once the idea took hold with Kenneth, he went to town with it, creating sequences and subsequences: 'Kenya Comics,' 'Autobiography Comics,' 'Hotel Igura Comics.' These works are enchanting, smart, funny, and, in Duke Ellington’s phrase, beyond category. My own favorite is 'The Dead White Man' sequence with its corrosive wit reminiscent of 'Fresh Air.' The eponymous hero gets the last word: 'If but one person reads me, then I am not really dead!!!'

When I visited Kenneth six weeks before he died in July 2002, he made a point of saying how close to his heart was his poetry comic book still unpublished though nine years had gone by since he had first shown me the manuscript. Now thanks to the efforts of a whole raft of people, it’s here. I wish Kenneth were around to enjoy it. But what am I saying? Like the hero of 'The Dead White Man,' Kenneth is not really dead. Rather he has, like the star of his favorite Romantic poet’s elegy for Keats, outsoared the shadow of our night. You, dear reader, are keeping him alive." --David Lehman, from his introduction

Kenneth Koch published many volumes of poetry, including A Possible World, and Sun Out: Selected Poems 1952-1954, both published in 2002. He was awarded the Bollingen Prize for Poetry in 1995, in 1996 he received the Rebekah Johnson Bobbit National Prize for Poetry awarded by the Library of Congress, and he received the first Phi Beta Kappa Poetry Award in 2001. Koch’s short plays, many of them produced off- and off-off-Broadway, are collected in The Gold Standard: A Book of Plays. He also wrote several books about poetry, including Wishers, Lies, and Dreams; Rose, Where Did You Get That Red; and Making Your Own Days: The Pleasures of Reading and Writing Poetry. He taught undergraduates at Columbia University for many years. Koch died in 2002.

1. The Art of the Possible!: Comics Mainly Without Pictures

2. The Art of the Possible!: Comics Mainly Without Pictures

3. The Art of the Possible!: Comics Mainly Without Pictures