Items related to Tillich: A Brief Overview of the Life and Writings...

Daniel Peterson Tillich: A Brief Overview of the Life and Writings of Paul Tillich (Theology for Life)

Tillich: A Brief Overview of the Life and Writings of Paul Tillich (Theology for Life) 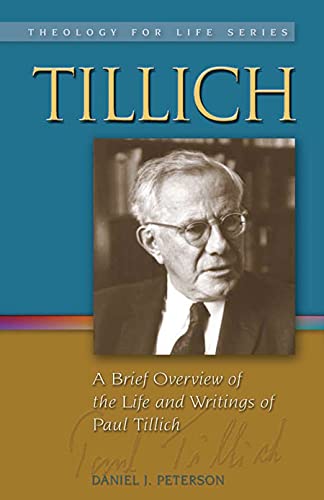 Considered at the height of his career to be the most dangerous theologian alive for challenging conventional notions of God, Paul Tillich (1886-1965) exercised a major influence on twentieth century American Christian thought. A native of Germany, Tillich immigrated to America after openly defying Hitler and the Nazi regime. By the end of his life he had made the cover of TIME magazine as America s premier Protestant intellectual, his thought becoming the subject of hundreds of books, articles and dissertations including one written by Martin Luther King, Jr. Yet for all his popularity at the time, Tillich became virtually unknown to American audiences by the end of the twentieth century. In this brief introduction to his work, Dr. Daniel Peterson makes the case for Tillich s broader relevance again as a theologian who can take us beyond the extremes of fundamentalist religion and empty skepticism to a deeper religious faith or spiritual path open to doubt and questioning.

Dr. Daniel Peterson teaches interdisciplinary courses in the humanities for Matteo Ricci College at Seattle University, and for the university Department of Theology and Religious Studies. He earned his B.A. in English from Santa Clara University, his M.Div. from Pacific Lutheran Theological Seminary, his M.A. in theology from the University of San Francisco, and his Ph.D. in theology from the Graduate Theological Union in Berkeley, California. He is an ordained minister of the Evangelical Lutheran Church in America and lives in Seattle.

Professor Daniel Peterson s book fills an important gap in Tillich scholarship: it is a splendid primer on all things Tillich for the beginning reader. Those well acquainted with Tillich writings, however, will also find this book stimulating and nourishing. As someone who has taught Paul Tillich to undergraduates for many years, I have long wanted to publish an introduction to Tillich that was accessible to undergraduates and the non-specialist reader. Professor Peterson has accomplished what I have failed to do: he has written the book that I always wanted to write myself. I look forward to using this book in my next undergraduate class on Tillich. --Frederick J. Parrella, Santa Clara University

1. Tillich: A Brief Overview of the Life and Writings of Paul Tillich (Theology for Life)

2. Tillich: A Brief Overview of the Life and Writings of Paul Tillich (Theology for Life)

3. Tillich: A Brief Overview of the Life and Writings of Paul Tillich