Items related to Cacti of Texas in their Natural Habitat

Cacti of Texas in their Natural Habitat 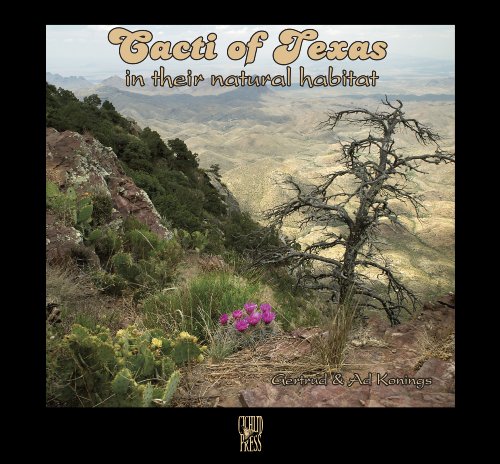 Cacti have fascinated Gertrud and Ad Konings since they moved to El Paso, Texas, in 1996. A few years later it became more than a fascination and they have traveled extensively throughout the state in order to locate and photograph each and every cactus species in its natural settings. With over nine years of cactus hunting (shooting with a camera exclusively!) under their belt, they are some of the very few people who have seen and photographed each of the 136 species in the wild.
Almost all of these species were photographed while in bloom; not a minor achievement when one considers that many species flower for just a single afternoon per year, if at all.

The allure of desert will absorb just about anyone, even those with a marginal interest in nature, and one can only be astounded by the myriad of life forms that survive in such a seemingly hostile environment. Cacti have always been associated with desert, and in Texas - the US state with the highest diversity of cacti - most of them occur in the so-called Trans-Pecos, which is the western part of the state that is covered by the Chihuahuan Desert.

Unassuming and often armed with spines a small cactus often goes unnoticed in its natural habitat. This, however, radically changes after rains provide the juice of life; flowers, sometimes larger than the plant itself, materialize in a matter of days and seize the moment to propagate in their normally hot and dry environment. Rarely a cactus flower is open for longer than seven hours, usually during the hottest time of the day, after which it wilts before the night falls. Because most cacti in any given area are synchronized by the irregular rain showers, most bloom on exactly the same day - an arresting spectacle. For most visitors to the desert such a mass blooming is a once-in-a-lifetime event, not easily forgotten, which adds to the excitement of being in a desert.

For someone not familiar with the desert and its life, a cactus usually is a plant with spines, but the first few pages of this book explains what belongs to the cactus family and what does not belong. One of the adaptations to living under very dry conditions is that cacti store water in their stems, they are succulents. Stored water can be used, little by little, to bridge the sometimes large dry spells between rains. Succulent plants occur all over the world, but all cacti are restricted to the Americas; originally, there were no cacti in Asia, Australia, Europe, or Africa until man brought them there.

This book represents the distillation of an extensive collection of photographs taken during innumerable hikes and tens of thousands of miles of driving on Texas roads.
The most important aspect of this book is the fact that each cactus is shown in its natural setting. Unite this fact with the stunning photographs, displaying the cacti at their best - in their natural habitat - and the result is the finest possible showcase for Texas cacti.

Gertrud Konings has a PhD in biology and teaches at the El Paso Community College. She is the newsletter editor of the El Paso Cactus and Rock Club.
Ad Konings is a biologist by profession and specializes in underwater observation and photography of cichlids (tropical freshwater fish) and has authored over 20 books relating to these fishes.

1. Cacti of Texas in their Natural Habitat