Items related to Game On: How the Pressure to Win at All Costs Endangers...

Farrey, Tom Game On: How the Pressure to Win at All Costs Endangers Youth Sports and What Parents Can Do About It

Game On: How the Pressure to Win at All Costs Endangers Youth Sports and What Parents Can Do About It 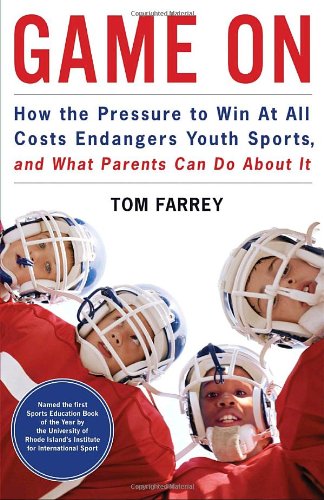 Played by more than thirty million boys and girls across the country, youth sports have turned from a casual activity for kids into a fanatical force–an intense, expensive, elitist rite of passage driven by the needs of impatient (if often well-meaning) adults. In Game On, award-winning ESPN reporter Tom Farrey explores the causes and consequences of our obsession with early success in sports. The effort to sort the strong from the weak at ever-younger ages, Farrey argues, pushes too many children to the sidelines–and ultimately undermines the quality of U.S. national teams. We’ve conscripted our kids into a sports arms race in which individual performance trumps participation and personal growth. To counter the effects of a win-at-all-costs culture, Farrey suggests measures that can help parents–and communities–get children off the couch without running them into the ground.

Much as Fast Food Nation challenged our eating habits and Outliers encouraged us to think in new ways about high achievers, Game On will change the way we look at the critically important games that American kids play.

Tom Farrey is an investigative journalist whose work has been recognized for excellence in print, on television, and online. A correspondent with ESPN's prime-time newsmagazine E:60, he also has reported on air for ESPN's Outside the Lines and SportsCenter, as well as for ESPN.com and ESPN The Magazine, where he is a senior writer. He joined ESPN in 1996, after eight years with The Seattle Times. In 2007, he was one of seven journalists selected among the 100 Most Influential Sports Educators in America by the Institute for International Sport at the University of Rhode Island. His reports have won many honors, including two Emmy awards for Outstanding Sports Journalism. Farrey lives in Connecticut with his wife, Christine, and their three children, Cole, Anna, and Kellen. This is his first book.

"Farrey provides an insightful analysis of American society today and gives us a provocative look at its future." -- Jay Coakley, author of Sports in Society: Issues and Controversies

"Everyone involved in youth sports should pledge to solve this mounting crisis so artfully exposed by Tom Farrey." -- Mark Fainaru-Wada, coauthor of Game of Shadows: Barry Bonds, BALCO, and the Steroids Scandal That Rocked Professional Sports

"Youth sports has become hyperorganized and deadly serious. Game On identifies the problem and points us toward some solutions." -- Bob Costas, NBC sports analyst and author of Fair Ball: A Fan's Case for Baseball

"Game On debunks the myths of child rearing and shows the lengths we go to and methods we use to build our children into athlete-entertainers at almost any cost." -- Former U.S. senator Bill Bradley, author of Values of the Game
From the Hardcover edition.

1. Game On: How the Pressure to Win at All Costs Endangers Youth Sports and What Parents Can Do About I

2. Game On: How the Pressure to Win at All Costs Endangers Youth Sports and What Parents Can Do About It

3. Game On: How the Pressure to Win at All Costs Endangers Youth Sports and What Parents Can Do About I