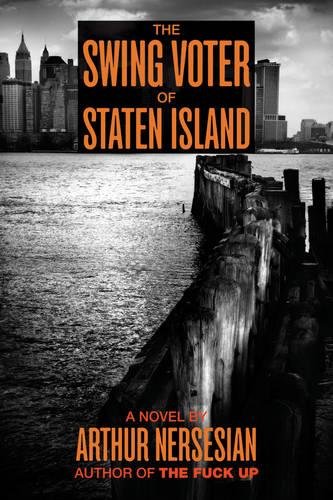 Fiction. In his boldest novel yet, Arthur Nersesian breaks into a new landscape that at once fuses the real with the surreal, the psychological with the psychadelic. THE SWING VOTER OF STATEN ISLAND takes place over the course of a week in November 1981. Uli, suffering form amnesia, finds himself on a mission but isn't quite sure what it is, who sent him, or even who he is. He ventures across the perilous wilds of New York City, through abandoned neighborhoods and burned-out battlefields, but soon awakens to the awful fact that this isn't New York City at all. He is a key player in a strange, alternate history of both his city and his country. Nersesian is the author of THE FUCK-UP, SUICIDE CASANOVA, and MANHATTAN LOVERBOY.

FROM KIRKUS REVIEWS, Oct. 2007: "Having first dazzled Weird-Lit ultra-hipsters with The Fuck-Up in 1997, Nersesian (Unlubricated, 2004, etc.) rounds out a busy decade with a dystopian epic.

Combining sci-fi space/time-warping, Unabomber-style political ranting and an overall air of goose-bump paranoia, this is one turbo-charged trip through a version of the 1980s no one could love. A gumbo of Weather Underground, S.L.A. and Black Panther droogies take over New York City in the '70s, splashing dirty bombs helter-skelter. Manhattan basically kaput, the federal government designates a former "military simulation city," a radioactive desert outside Vegas, as the New New York. The geographic layout's a convincing copy, but landmark names are corrupted: "Vampire Stake Building," "Onion Square," "Rock & Filler Center." And the Gangs of New York rule, with the Boroughs divided between Piggers (or We the Peoplers) and Crappers (All Created Equalers), political parties at mutual knifepoint. Into this bedlam drops protagonist Uli, a Manchurian Candidate knock-off programmed by mysterious nefarious forces to assassinate Dropt, a rival candidate to Pigger Mayor Shub. Hizzonner spouts masterful Orwellian jive ("He's intractable in a business that requires a lot of tractoring!"), and the citizens, when not overdosing on creepy new drugs, fantasize returning to the real Manhattan. But much to the fury of Abbie Hoffman and Allen Ginsberg, Ronald Reagan is running for re-election. If Staten Island's borough president allies with the national Democrats and Reagan loses, nobody gets to go back, because it's only budget-crunching Ronnie who wants to deep-six the fake New York. The loony-tune plot merely serves as a launch pad for Nersesian's meditations on Vietnam-era military insanity, big-city frenzy and the Tower of Babel capacities of language.

Arthur Nersesian (born 1958) is an American novelist, playwright, and poet. Neresian is of Armenian and Irish descent. He was born and raised in New York City. His novels include The Fuck-up, Manhattan Loverboy, dogrun, Chinese Takeout, Suicide Casanova and Unlubricated. He has also published a collection of plays, East Village Tetralogy. He has written three books of poems and one book of plays. In 2005, Nersesian received the Anahid Literary Prize for Armenian Literature for his novel Unlubricated. Nersesian is the managing editor of the literary magazine, The Portable Lower East Side, and was an English teacher at Hostos Community College, City University of New York, in the South Bronx.