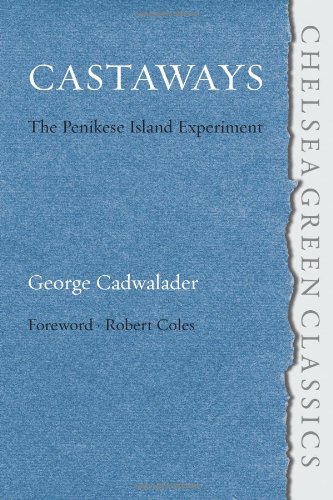 Cadwalader, a Marine captain severely wounded in Vietnam, recuperates but is unable to return to combat. Strongly influenced by his experience in the Marines, he recruits a small band of unlikely "teachers" - well-educated social drop-outs - and launches an experiment in the rehabilitation of hard-core juvenile delinquents. The site he selects is Penikese, a remote island off the Massachusetts coast. Once a leper colony, Penikese is slowly transformed by the students and staff into a self-sufficient school community.

The Outward-Bound atmosphere the author and his staff create on the primitive island involves construction, boat-building, farming, and nature study. If the wood isn't chopped, there's no heat; if the vegetables aren't harvested, there's no food. Cadwalader and his cohorts treat the kids consistently, and try to hold them accountable for their actions.

Buffeted on all sides - by the weather, the violent unpredictability of the kids, jittery surrounding communities, and a rudderless criminal justice system - the author undergoes some painful changes as he confronts the stark irrationality and rock-hard recalcitrance of his juvenile criminal charges, some of whom he takes into his own home. The admonition of an old Marine sergeant comes back to haunt him: "That son-of-a-bitch was born bad, and ain't you or anyone else gonna change him."

But Cadwalader and his colleagues persist, and despite setbacks, the school survives. The dialogue is raw and gritty. The narrative moves from the hilarious to the somber and back again as the author chronicles the lives of the boys who come from Penikese. Castaways is a true story, a tale of idealism tempered but not surrendered - an intensely human portrait.

George Cadwalader was in Vietnam when a land mine ended his tour of duty there in 1965. Five years later, a major, he left the Marines to work as an administrator at the Woods Hole Oceanographic Institute. In 1973 he founded the Penikese Island School. He lives in Woods Hole, Massachusetts, with his wife, Yara Cadwalader.

"Boot Camp for Delinquents," New York Times Review-
Who but an idealist would isolate himself on a desolate dot of land in Buzzards Bay with hard-core delinquents let out of reform school by the State of Massachusetts and expect through toil and example to transform his charges within four months into law-abiding citizens?

George Cadwalader, founder and director of the Penikese Island School, a former Marine wounded in Vietnam, himself a castaway of sorts, tells a tale some child advocates may not wish to hear, and tells it unflinchingly. Truth tastes bitter, wise men say. But everyone interested in improving the quality of life for young people should read "Castaways."

In 1973 when Penikese began, deinstitutional fever was at its peak. The Massachusetts Department of Youth Services, led by the "charismatic" Jerome Miller, as Mr. Cadwalader calls him, had moved delinquents out of detention into a loose network of community-based homes and residences staffed largely by members of the counterculture who believed that antisocial behavior was a logical response to an unjust society. Give the kids plenty of love and they would straighten up.

Mr. Cadwalader resisted the rose-pink vapors of sentimentality and set up a boot camp, Robinson Crusoe model, where boys constructed dormitories and classrooms, raised food, cut firewood and were supposed to incorporate the values of their mentors.
Over the years, as Mr. Cadwalader ferried boys on and off the island and followed their largely disastrous return to society, he faced areas of unreality in himself and hard facts about the boys and what ought to be done with them. The treacherous reefs and currents, the cry of gulls, the ghosts of lepers formerly domiciled on the island became a metaphor for his struggles with the boys, his heroic battles with the bureaucracy and his growing realization that faith in goodness and the natural order are not always enough.

The author and his staff pined for the ''old-fashioned delinquent.'' They were unprepared for the impulsiveness, the lack of empathy, the chameleonlike adaptability, the cruelty and, above all, the complete randomness of the boys' behavior. Marooned on Penikese in the Elizabeth Islands, 12 miles from Woods Hole on Cape Cod, they seemed to have turned around. Back on the mainland they reverted to theft, assault and rape.

Mr. Cadwalader discovered (reinventing the wheel) that these delinquents had no center. Their deepest imprint was of chaos. Still, 16 percent kept out of trouble, worked and did well. Mr. Cadwalader felt he had failed. It was, in fact, a small triumph. We learn to think modestly in this field, despite inflated claims in some quarters.

When his job-training program floundered, Mr. Cadwalader, ''sick of bureaucrats and sicker of delinquents,'' was ready to quit. Trying for Erewhon he had stumbled into the "Clockwork Orange" society. But he clung on, somehow, like a limpet to a rock. Penikese continues and has made a comeback, with more realistic expectations and tougher approaches.

The lesson of "Castaways" is that it takes as long to get out of trouble as to get into it, that troubled lives must be unraveled and rewoven thread by thread -years of work, if one knows how to do it. It would be easier and cheaper to provide families and children with the community structures they need to thrive.

"Castaways," which beautifully captures the language and lives of tough street kids, concludes that accountability is the missing ingredient in most programs. Children must learn, through a system of rewards and punishments, that their acts have consequences. And a few, for their own and society's sake, should be locked up.