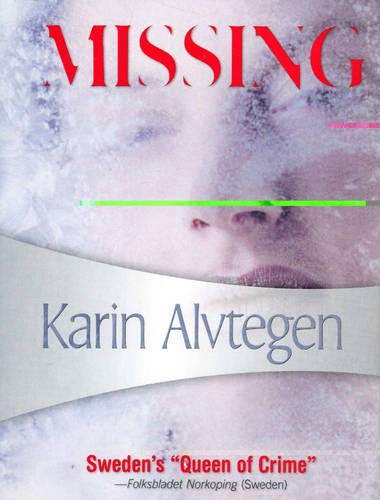 Born into a life of privilege, Sybilla has spent many years opting instead to live on the streets of Stockholm, cadging a bed, a bath, a meal, where she can. Her favorite technique?one she permits herself only as a special treat?plays out at the Grand Hotel, where with luck she can usually charm a lonely visiting businessman into buying her dinner and a room for the night. But then she picks the wrong businessman. When his dead body is found the next morning, Sybilla becomes the prime suspect. For years, her anonymity has sheltered her; she has found a kind of home in the invisibility of homeless life. But with her anonymity shattered, Sybilla is forced into the one course of action that might allow her to go home again.

Karin Alvtegen was born in 1956, and grew up in a a small town in Sweden, where her parents were teachers. When she was in her late 20's and pregnant with her second child, her elder brother was killed in a mountaineering accident and Alvtegen began to suffer from increasingly debilitating panic attacks. Eventually -- and without any training or thought of becoming a novelist -- she resolved to write her way out of the problem: The result was her first novel, Guilt (Skuld), which was published in Sweden in 1998, to rave reviews. This was followed in 2000 by Missing (Saknad), which won Scandinavia's prestigious Glass Key award for Best Crime Novel of the Year, and went on to win an award for bestselling Scandinavian paperback. Her third novel, Betrayal (Svek) -- coming next year from Felony & Mayhem -- was shortlisted for the Glass Key award, and also for the Swedish Crime Writers Academy award for Best Swedish Crime Novel of the year. And Swedish reviewers have called Alvtegen's most recent novel, Shame (Skam) (also to come from Felony & Mayhem) her finest novel to date -- the work, in the words of one critic, of "a modern-day Strindberg." Karin Alvtegen is the great-niece of Astrid Lundgren, author of the ever-popular "Pippi Longstocking" books. She lives with her husband and two children in Stockholm.

*Starred Review* Sybilla may have been born to wealthy parents, but her home life was never easy, and she ran away at 17. Ever since, Sybilla has been homeless and living off the grid. Her peaceful existence comes to a sudden end when she is accused of murder and goes on the run, too scared to go to the police and clear herself but frantic to regain her carefully built life. Both a mystery (Who is really doing the murders?) and a psychological study (Why did Sybilla run from her family?), Missing heralds the arrival in the U.S. of another outstanding Scandinavian crime writer. Winner of the Glass Key Award in Sweden, this is a taut, riveting, and impossible-to-put-down story of a young woman caught up in a bad situation. Recommend to readers who enjoyed Petra Hammesfahr’s The Sinner (2007), for the similarly tormented female main character, and fans of Asa Larsson’s Rebecca Martinsson series (Blood Split, 2007), for a Swedish woman who must solve a crime that requires facing her painful past. Highly recommended for all crime-fiction collections. --Jessica Moyer