Items related to Searching for Philadelphia: The Concealed City

Searching for Philadelphia: The Concealed City 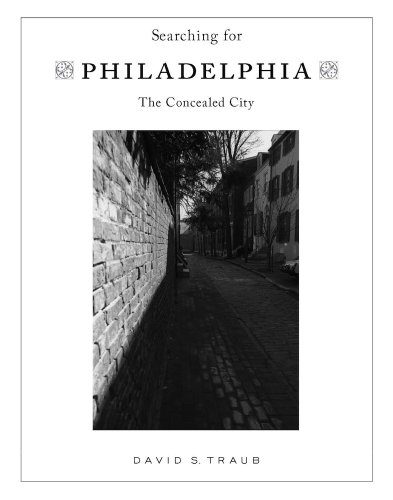 Searching for Philadelphia utilizes photographs to bring awareness of the many largely hidden and unexpected architectural treasures the city has to offer. Most of these would likely be missed except by the curious and alert pedestrian. The book is made up of seven distinct sections.

In Alluring Entryways, memorable doors and portals are featured in various locations, including Pemberton, Smedley and Camac Streets.

In Secret Gardens, some of the least known and most beautiful little verdant precincts are featured. Among others, the plots at Powell House, Physick House, the College of Physicians and the Society of Colonial Dames are wonderfully revealed.

In Tiny Parks, recreational spaces both small and quaint are the focus. Included are sites ranging from Fitler Square, known by some, to places known by very few, such as Daniel Michaux Coxe Park, Bardascino Park and the Palmer Burial Ground.

Finally, in Unnoticed Buildings, structures unique to Philadelphia are brought to light. These include two fine carriage houses, a Romanian Orthodox church, other intriguing Christian places of worship, a most unusual old shot tower, two notable synagogues from past and present, structures once housing a classic bank and firehouse, and residences only to be found in the Quaker City.

A photographic collection to be enjoyed for many years to come, Searching for Philadelphia gives recognition to the overlooked views that lend exceptional character and a human dimension to a great American city.

David S. Traub, a native of Louisville, Kentucky, studied architecture at the University of Pennsylvania in the Master Class of Louis I. Kahn. From 1970 to 1973, he worked in Kahn s office and was assigned to two important projects: the Kimbell Art Museum in Fort Worth and the Yale Center for British Art in New Haven. In 1974, Traub established his own architectural office on Walnut Street. In 2006, he moved to a Victorian carriage house that he restored in the Fairmount section of Philadelphia, not far from the Philadelphia Museum of Art.

David S. Traub is the author of many articles concerning architectural preservation. He is also the co-founder of the Philadelphia preservation group, Save Our Sites (SOS).

1. Searching for Philadelphia: The Concealed City

2. Searching for Philadelphia: The Concealed City