Items related to The 7 Habits of Highly Effective Teens

The 7 Habits of Highly Effective Teens 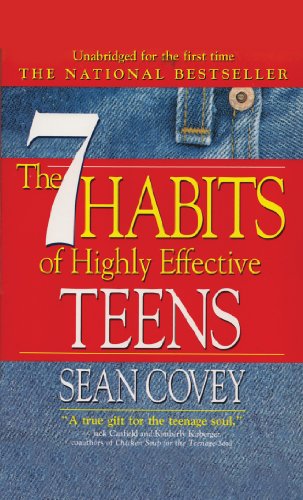 Being a teenager is both wonderful and challenging. In The 7 Habits of Highly Effective Teens, author Sean Covey applies the timeless principles of the 7 Habits to teens and the tough issues and life-changing decisions they face. Covey provides a step-by-step guide to help teens improve their self-image, build friendships, resist peer pressure, achieve their goals, and much more. In addition, this audiobook is stuffed with great ideas and incredible stories about real teens from all over the world. An indispensable audiobook for teens, as well as parents, grandparents, and any adult who influences young people, The 7 Habits of Highly Effective Teens is destined to become the last word on surviving and thriving as a teen and beyond.

Based on his father's bestselling The 7 Habits of Highly Effective People, Sean Covey applies the same principles to teens, using a vivacious, entertaining style. To keep it fun, Covey writes, he "stuffed it full of cartoons, clever ideas, great quotes, and incredible stories about real teens from all over the world... along with a few other surprises." Did he ever! Flip open to any page and become instantly absorbed in real-life stories of teens who have overcome obstacles to succeed, and step-by-step guides to shifting paradigms, building equity in "relationship bank accounts," creating action plans, and much more.

As a self-acknowledged guinea pig for many of his dad's theories, Sean Covey is a living example of someone who has taken each of the seven habits to heart: be proactive; begin with the end in mind; put first things first; think win-win; seek first to understand, then to be understood; synergize; and sharpen the saw. He includes a comical section titled "The 7 Habits of Highly Defective Teens," which includes some, shall we say, counterproductive practices: put first things last; don't cooperate; seek first to talk, then pretend to listen; wear yourself out... Covey's humorous and up-front style is just light enough to be acceptable to wary teenagers, and down-and-dirty enough to really make a difference. (Ages 13 and older) --Emilie Coulter

Sean Covey works for FranklinCovey as Executive Vice President of Innovation and Products. He graduated with honors from BYU with a degree in English and later earned his M.B.A. from Harvard Business School. As the starting quarterback for BYU, he led his team to two bowl games and was twice selected ESPN Most Valuable Player. On the side, he likes to write books and is the author of The 7 Habits of Highly Effective Teens, The 6 Most Important Decisions You'll Ever Make, and The 7 Habits of Happy Kids. He lives in the Rocky Mountains in Utah with his wife Rebecca and their children. Sean's favorite pastimes include going to movies, working out, eating, and writing.

1. The 7 Habits of Highly Effective Teens

Book Description Franklin Covey, 2011. Condition: Good. Com/Cdr Un. Shows some signs of wear, and may have some markings on the inside. Seller Inventory # GRP113708508

Book Description Franklin Covey Co, 2009. Audio CD. Condition: Very Good. Audio book. Very Good: a copy that has been read, but is in excellent condition. Pages are intact and not marred by notes or highlighting. The spine remains undamaged. Most items will be dispatched the same or the next working day. Seller Inventory # mon0012565117

3. The 7 Habits of Highly Effective Teens

Book Description Franklin Covey, 2011. AudioCD. Condition: Good. 6 AUDIO CD SET withdrawn from the library collection. Some library marking. We will polish each of the Audio CDs for a good sound. You will receive a reliable set. Enjoy this presentable AUDIO CD performance. Seller Inventory # 11202018997