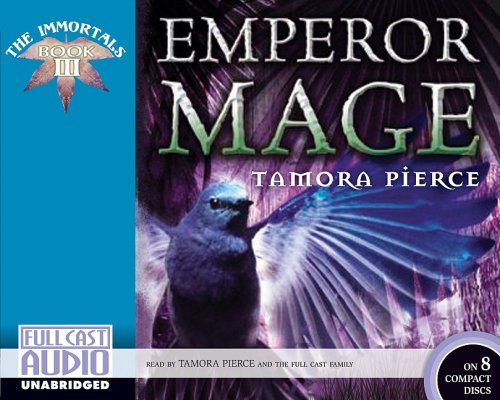 Daine accompanies a Tortallan delegation to the court of Ozorne in the third volume of Pierce’s phenomenally popular Immortals Quartet. But as she enters a glittering world laced with danger and treachery, the danger grows even more intense when the gods themselves push her to use her wild magic for their own ends.

Daine sails to Cathak as part of a peace treaty delegation from Tortall. There she is amazed by strange and wondrous sights, including rooms filled with dinosaur bones and the Emperor Mage's zoo. But she also senses a darkness beneath all the gold and glitter, a darkness that lies in wait. At the same time, Daine is discovering that her own wild magic is growing again, this time giving her powers both great and terrifying.

Emperor Mage is the third book in The Immortals series, which chronicles a time when the world is invaded by immortal creatures and a girl is born with a magical gift that could restore the very balance of nature.

TAMORA PIERCE has published more than two dozen novels, including the New York Times bestsellers Trickster’s Choice and Will of the Empress. She lives in Syracuse, New York.