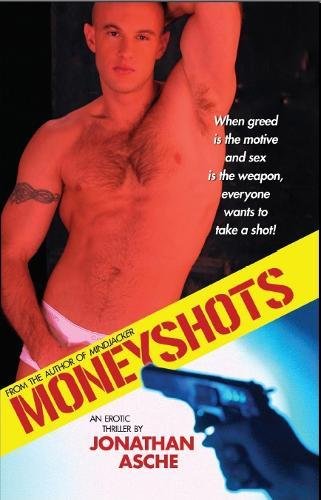 Martin Richter is rapidly sinking into a midlife depression. His longtime lover has left him for a younger man, and the last guy who showed an interest in him was a hustler. Then, Martin meets a sexy, young drifter named Rand, and his outlook, along with his sex life, takes a turn for the better. Then Rand disappears from Martin's life as abruptly as he entered it. Martin is devastated, but when a man claiming to be Rand's boyfriend shows up at his door, Martin fears there might be more sinister reasons behind Rand's disappearance. Desperate to find Rand, Martin embarks on a search that puts him in bed with a scheming pornographer and in the cross hairs of a well-endowed hit man. Amidst the naked bodies and flying bullets, Martin discovers his fantasy man just might be his ultimate nightmare. With its speeding-bullet plot and hot-leaded sex, Moneyshots is a high-caliber, erotic thriller pumping with action. Whether read with white knuckles or one hand, Moneyshots is right on target.