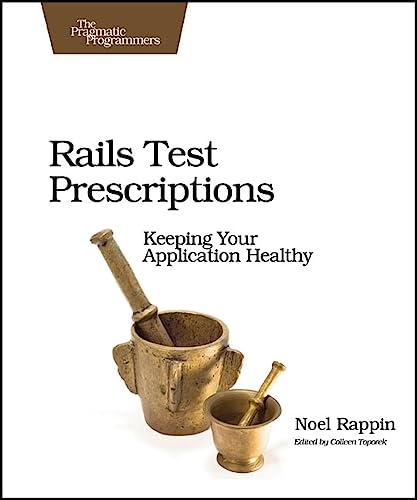 Rails Test Prescriptions is a comprehensive guide to testing Rails applications, covering Test-Driven Development from both a theoretical perspective (why to test) and from a practical perspective (how to test effectively). It covers the core Rails testing tools and procedures for Rails 2 and Rails 3, and introduces popular add-ons, including Cucumber, Shoulda, Machinist, Mocha, and Rcov.

Your Ruby on Rails application is sick. It's got bugs. Nobody remembers what that tricky piece of code was supposed to do, and nobody can tell what it actually does. Deadlines are looming, but every time you make the slightest change to the code, something else breaks.

You need Test-Driven Development (TDD), a proven process for improving the design, maintainability, and long-term viability of software. In TDD, the tests come first, and then code is written to match the expectation of the test. Using TDD means writing better code faster.

Ruby on Rails has unparalleled support for TDD. In addition to the tools that Rails has built-in, a large and thriving testing community adds new tools at an accelerating rate. Rails Test Prescriptions is your guide to the entire Rails testing ecosystem.

Containing both practical code examples and discussion of why testing works, this book starts with the most basic features delivered as part of core Ruby on Rails. Once you've integrated those features into your coding practice, you'll want to use popular third-party testing tools such as RSpec, Shoulda, Cucumber, Factory Girl, and Rcov. Rails Test Prescriptions will show you how to use these tools and when they are appropriate. Rails Test Prescriptions will cover both the current Rails 2.3.x version as well as the initial 3.0 release.

Noel Rappin is a Senior Consultant at Obtiva. A Rails developer for five years, Noel has spoken at RailsConf and Windy City Rails, and is the author of Professional Ruby on Rails from Wrox Press. A blog relating to this book can be found at http://www.railsrx.com.