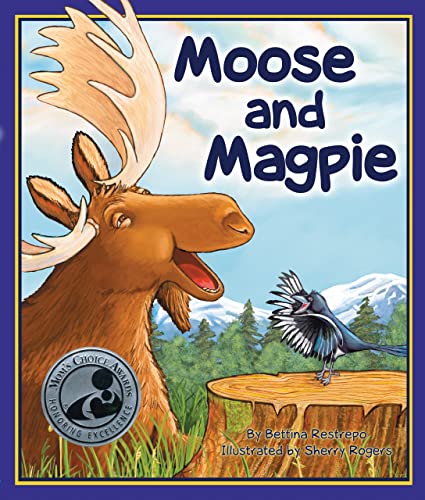 It isn t always easy being a moose but this young moose has a special, joke-telling friend to keep him company and to help him find his way. Join Moose, Magpie and some of their other animal friends as they frolic through a year of changes. Learn what the Liberty Bell and moose have in common or why moose cross the road. Laugh along with Moose and Magpie, and learn something while you are at it. The For Creative Minds educational section includes: Is if for real?, Moose and birds, What do moose eat?, Match the moose body part to its adaptation, Moose life cycle, Moose antlers, and Moose fun facts.

Bettina Restrepo is a professional writer who has appeared in Highlights for Children, Nature Friend, and Boy's Life magazines. Bettina graduated from the University of Texas at Austin with a degree in Speech Communications and spent over fifteen years in the retail industry as a merchandise manager and auditor. She achieved her dream and is now writing at home with her husband, son, and dog in Texas. Moose and Magpie is Bettina's debut picture book. She is busy writing about more animals and is completing her fourth young adult novel. She is thrilled to share this book with elementary schools across the globe. Sherry Rogers spent twelve years as a corporate graphic designer and artist before leaving it all behind for the freelance world. In addition to illustrating Paws, Claws, Hands & Feet, Sherry has illustrated Moose and Magpie, Sort It Out!, Kersplatypus, Burro's Tortillas, and If You Were a Parrot for Sylvan Dell and Counting Little Geckos. Sherry, her husband, and two children live in Northern California.

PreSchool-Grade 1—This slight story about Moose and his joke-telling pal, Magpie, doesn't have enough substance to sustain a child's interest. The simple story line, using a bizarre combination of fact and fantasy, follows the young creature from early summer through fall and into winter. During those months, the moose grows, sheds antlers, and learns to understand and tell jokes. Magpie, a raccoon, a skunk, and a beaver accompany him as he aimlessly wanders the countryside and swims the river. The lame jokes are superfluous and nonsensical. Only Moose and Magpie speak, but the beaver wears glasses and reads books, the raccoon eats chocolate mousse, the skunk uses hair mousse, and all the animals except Moose walk upright. Each page has a small fact box, and the book concludes with four pages of information on birds and moose. The text is illustrated by brightly colored pictures, with everything outlined in black. While the illustrations may appeal to children, they are not enough to save this book.—Maryann H. Owen, Racine Public Library, WI END