Items related to War in the Far West (Called to War, Volume 2)

War in the Far West (Called to War, Volume 2) 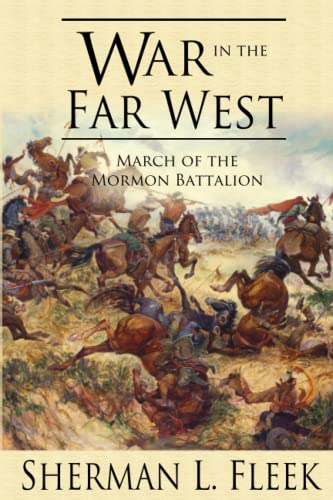 War in the Far West: March of the Mormon Battalion

If you were captured by the first volume: Called to War: Dawn of the Mormon Battalion, then you can't wait to get a hold of this book!

Synopsis
War in the Far West is the epic story of war and conquest in California and northern Mexico. American soldiers and Mexican lancers clash in bloody battles for control of California. The long march of the Mormon Battalion ends and its consequence of what war does to people, especially the Barlow family. In California severe trials of leadership and governance arise among the American military factions. Even in the Battalion itself the soldiers try to determine which authority is supreme--religious or military. War and rebellion rage in New Mexico where its new American citizens are caught in the vortex of intrigue and battle. Then wild Missouri volunteers face a severe campaign against Navajos and Mexicans across a forbidding land.

The dramatic story continues with Victoria Barlow and her sons Arthur and York as they struggle to find happiness and peace in amidst the turmoil of war and frontier military service. The Mormon Battalion is discharged and the Barlows journey east over the mountains and deserts but soon the brothers must choose between continued military service or gathering to the new Zion in Utah.

About the Author:
Sherman L. Fleek is a retired Army lieutenant colonel, and currently serves as the command historian of the United States Military Academy at West Point, New York.

Book Description Digital Legend Press, 2011. Paperback. Condition: Good. Connecting readers with great books since 1972. Used books may not include companion materials, some shelf wear, may contain highlighting/notes, may not include cdrom or access codes. Customer service is our top priority!. Seller Inventory # S_271681894

Book Description Digital Legend Press. Paperback. Condition: GOOD. Spine creases, wear to binding and pages from reading. May contain limited notes, underlining or highlighting that does affect the text. Possible ex library copy, will have the markings and stickers associated from the library. Accessories such as CD, codes, toys, may not be included. Seller Inventory # 3079288492