Items related to Getting America Back to Work

Stewart Acuff; Dr. Richard Levins Getting America Back to Work

Getting America Back to Work 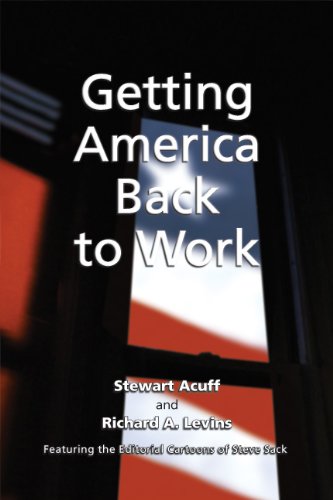 America works, but only for the Financial Elite. In Getting America Back to Work, America's best known and foremost union organizer and an award-winning University economist show how to put money and power back into the hands of working families.

Dr. Richard Levins shows how ''money talks'' -- no, screams -- in Washington and on Wall Street. Stewart J. Acuff shows how organized people can get America back to working for ordinary Americans.

Stewart J Acuff has been an organizer for more than 30 years. He started union organizing in1982 as the Service Employees International Union organizing coordinator in Texas where he and his team organized 12 nursing homes in two years. In 1985 Stewart went to Georgia where he founded SEIU Local 1985 and built the union up to 3000 members. In 1990 he became president of the Atlanta AFL-CIO where he organized and led the historic campaign to unionize the 1996 Olympics, labor's biggest victory ever in the South. In 2000 he went to work for the national AFL-CIO. Stewart was organizing director from 2001-2008. Under his tenure the labor movement grew by more than it had in a generation. Stewart developed the policy and legislation which became the Employee Free Choice Act and led the campaign to pass it. Currently, he is Chief of Staff of the Utility Workers Union of America.

Dr. Richard A. Levins is Professor Emeritus of Applied Economics at the University of Minnesota. He is an award-winning author of books about policy and market power issues affecting the food system. His articles have appeared in major newspapers across the country, in leading industry publications, and in professional journals. His writing draws upon a 25-year academic career involving both advising ongoing businesses and teaching economic principals at the college level. He maintains an active practice in consulting, writing, and public speaking.

''Stewart Acuff has done it again! He is quickly proving himself as the best in America at taking complex issues and explaining them to the average working family in a way we can completely understand. This time he has taken on the fat-cat bankers, the multi-national corporations and the greediest of the greedy and has taken apart their 'rich should get richer' arguments piece by piece. In this short publication, he has laid out the arguments against free-trade, bank bailouts, risky tax schemes and how to really fix the main broken components of the U.S. economy in a way only he can do. Whether writing in the world of online bloggers, speaking to thousands of trade-unionists, taking on the right-wing pundits on FOX news or through writings like this superb easy-to-read book, Stewart Acuff never seems to disappoint! Its time to take back our economy and now, with Acuff's Getting America Back to Work, we have our own GPS system to get us there.''--Tim Waters, United Steelworkers Director of Rapid Response

''In the more than 30 years that Stewart Acuff and I have been co-workers and friends, he has consistently been one of the most creative and committed organizers in the labor movement and beyond. When Stewart was leader of the Atlanta Central Labor Council, The Nation rightly called it the country's 'most vibrant and militant CLC.' Now Stewart and Richard Levins have merged the wisdom of their two outstanding careers into one hard-hitting manual for everyday working people who are trying to take our country back from the Big Boys who have stolen it. Read it, stand up and fight back.''--Si Kahn, Executive Director Emeritus, Grassroots Leadership; Distinguished Senior Fellow, Demos.

''You can read this little book in less time than it takes to watch your favorite TV show. but you'll be thinking about it as often as you hear about a friend or family member who is looking for work, or has trouble making ends meet, or gets abused on their job. Not only does it reveal why those things are happening, it tells what we need to do to stop them. There's plenty of work to be done in America -- for example, creating green jobs that reduce our dependence of fossil fuels.... but the super rich who control our economy aren't going to do that for us. Read Getting American Back to Work if you want to find out how we can do it for ourselves.''--Jeremy Brecher, author of Strike!, Labor Network for Sustainability

Repeatedly we have allowed wealthy special interests to intimidate us with the threat of moving jobs to another state if we do not pay. States play ''Rob Your Neighbor'' so that companies hop from one sweetheart deal to the next, leaving behind a swath of economic disaster.
As Stewart Acuff and Richard A. Levins point out in their short but powerful book Getting America Back to Work, such legislative actions are the result of ''intentional, sustained, strategic public policy bad public policy cooked up by the Financial Elite and their henchmen.'' The outcome is that the USA has stopped working for ordinary Americans, favoring only a handful of unbelievably rich and powerful individuals.
We must return to our nation's highest values, affirming that people come before profits and every worker deserves dignity and respect. We must organize a movement large enough and strong enough to challenge those who push the lie that ''greed is good'' and that short-term profits justify harming the environment or our neighbors.
By investing in the common good (education, infrastructure, energy efficiency, affordable housing, etc.), we can grow the middle class and end three decades of stagnant wages. We all do better when we all do better. --Jeanette Mott Oxford State Representative, 59th MO House District

1. Getting America Back to Work

2. Getting America Back to Work

Book Description Tasora Books. Paperback. Condition: Very Good. A copy that has been read, but remains in excellent condition. Pages are intact and are not marred by notes or highlighting, but may contain a neat previous owner name. The spine remains undamaged. At ThriftBooks, our motto is: Read More, Spend Less. Seller Inventory # G1934690279I4N00

3. Getting America Back to Work

4. Getting America Back to Work

5. Getting America Back to Work

Book Description Tasora Books, 2010. Condition: Good. A+ Customer service! Satisfaction Guaranteed! Book is in Used-Good condition. Pages and cover are clean and intact. Used items may not include supplementary materials such as CDs or access codes. May show signs of minor shelf wear and contain limited notes and highlighting. Seller Inventory # 1934690279-2-4

6. Getting America Back to Work