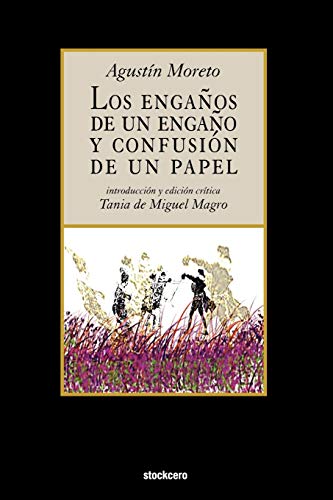 Agustin Moreto (1618-1669) was one of the most acclaimed playwrights of the Spanish Golden Age, his fame equaling that of authors such as Calderón de la Barca, Tirso de Molina and Lope de Vega. However, and in spite of the appreciation modern critics have expressed for his work, only two of Moreto's famous plays -"El lindo don Diego" and "El desdén, con el desdén"- are available in modern editions. The present volume is a critical edition of "Los engaños de un engaño", one of many Golden Age comedies left unpublished for many years until now. It is a supremely conventional play, featuring archetypical issues and characters, and is thus of particular interest for the study of the genre, since until now many assumptions about Spanish baroque theater have been based upon analysis of highly sophisticated plays that might be regarded as exceptions rather than the general rule. Since most of the plays familiar to a seventeenth century audience were more similar to "Los engaños de un engaño" than to "La vida es sueño", the edition and availability of texts such as this will undoubtedly contribute to a most necessary revision of current theories on Golden Age comedy. The modern reader wishing to become acquainted with baroque theatre will find here an excellent starting point, as this is a typical "cloak and dagger" comedy, including all the basic elements of the genre expressed with the formal and linguistic simplicity characteristic of Moreto's texts. "Los engaños de un engaño" is a delicious drama of love and jealousy, full of identity confusion, lies, duels, ladies in love, brave suitors, joking servants, and a father obsessed about his honor. Stage action and logical reasoning create tangles that keep the spectator (or reader) fully engaged until the end. Tania de Miguel Magro's ample and detailed notes take into account the expectations and needs both of the Spanish student and of the specialized critic, while the foreword provides a general understanding of the times, the genre and the author, as well as analysis and interpretation of the play. A basic bibliography prompts the reader to continue his research. This edition constitutes a great basis for a fresh approach to Spanish Golden Age courses, and suggests interesting comparisons between the realities of the 17th century (as depicted in this play) and the more idealized images provided by more sophisticated and literary plays of that time.