Items related to 428-1/2: My Journey Beyond the Railroad Tracks

Georgia Gianakos Buchanan 428-1/2: My Journey Beyond the Railroad Tracks 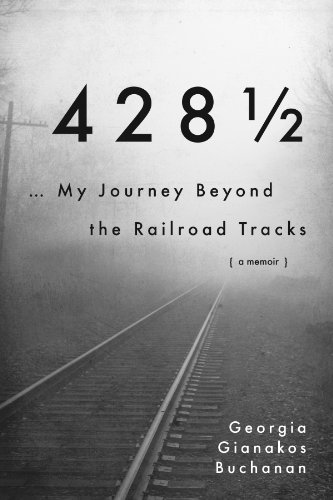 Georgia Gianakos Buchanan, the daughter of Greek immigrants, has written a memoir of her rich and varied experiences, both in her hometown of Indianapolis and in the many other places where she lived and traveled over the past 85 years. Included in 428 ˝ : My Journey Beyond the Railroad Tracks are such tales as the day Cary Grant came unannounced to her desk at the Indianapolis News where she covered movies and the golden age of television. At another interview, she and Jack Benny shared a laugh when she said he really was a skinflint (a role he portrayed all his life) when he helped himself to half of her lunch sandwich. Buchanan s six-year career at the News sent her on press junkets to New York and Hollywood and earned her interviews with dozens of the leading celebrities. She also spent five years as the news assistant to famed radio commentator Fulton Lewis, Jr., at Mutual Broadcasting in Washington, DC, when she and her husband lived there in the 1950s and 1960s. Interested in writing all of her life, she honed her skills at Manual and Shortridge High Schools and at Butler University, before striking out on a decades-long career. Her marriages took her not only to Washington, but on world travels, including the opportunity to dine with the Duke and Duchess of Marlborough, while paying for the privilege to spend a few days on their English estate. It was a long way from growing up with other children of immigrants of Eastern and Southern Europe in The District, an area slightly west of the State Capitol. The Gianakos family lived in a 24-step walk-up at 428-1/2 West Washington Street, a few doors from her father s restaurant. Though her early years may have been humble, it was the determination and resilience of her parents, both born in Greece, that drove her own desire to become educated and participate in an active social and political life, while sharing their concerns to help those less fortunate. Woven throughout this very readable book are the challenges and high points of being the mother of a special-needs son who benefited from his mother s encouragement for him to excel as much as he could. After her career in journalism, she became well known for her success as a fundraiser, creating and implementing gala events for many local arts organizations and charities, raising a total of one million dollars. Her organizational skills, her knowledge of the community, and her bold approach to raising money earned her a reputation as the person you wanted to manage your organization s fundraisers. Wisely, she has, throughout her book, listed local, national, and international events happening at that point in her life, giving readers a perspective that many memoirs do not offer. Whether the reader is very familiar with the content of her book or approaches it with little knowledge of her 8-1/2 decades, or the current events of those years, her memoir provides a warm reminiscence of a life well-lived.

Georgia Gianakos Buchanan, the daughter of Greek immigrants to Indianapolis, earned her degree from Butler University and went on to become a journalist in Indianapolis and Washington, DC. Following her journalism career, she devoted years to managing gala fundraisers for nonprofits. She has been involved in Special Olympics and other organizations devoted to special-needs persons. One of the most compelling stories in her memoir is her description of the joys and challenges of raising her son. Today, Buchanan retains her strong ties to the Greek community in Indianapolis and elsewhere, and maintains a busy schedule with her active involvement in many nonprofits.

"Georgia Buchanan has been an active supporter and fund raiser for nonprofits across our community for decades....Her book tells the story of her life as the daughter of Greek immigrants through the production of many gala events that have raised over $1 million for charity." --Bryan Orander, Indianapolis Not-for-Profit Newsletter

Book Description Buchanan Books, 2012. Paperback. Condition: Good. Connecting readers with great books since 1972. Used books may not include companion materials, some shelf wear, may contain highlighting/notes, may not include cdrom or access codes. Customer service is our top priority!. Seller Inventory # S_256001905

Book Description IBJ Custom Publishing. Paperback. Condition: Very Good. A copy that has been read, but remains in excellent condition. Pages are intact and are not marred by notes or highlighting, but may contain a neat previous owner name. The spine remains undamaged. At ThriftBooks, our motto is: Read More, Spend Less. Seller Inventory # G1934922692I4N00

Book Description Buchanan Books, 2012. Condition: Good. A+ Customer service! Satisfaction Guaranteed! Book is in Used-Good condition. Pages and cover are clean and intact. Used items may not include supplementary materials such as CDs or access codes. May show signs of minor shelf wear and contain limited notes and highlighting. Seller Inventory # 1934922692-2-4